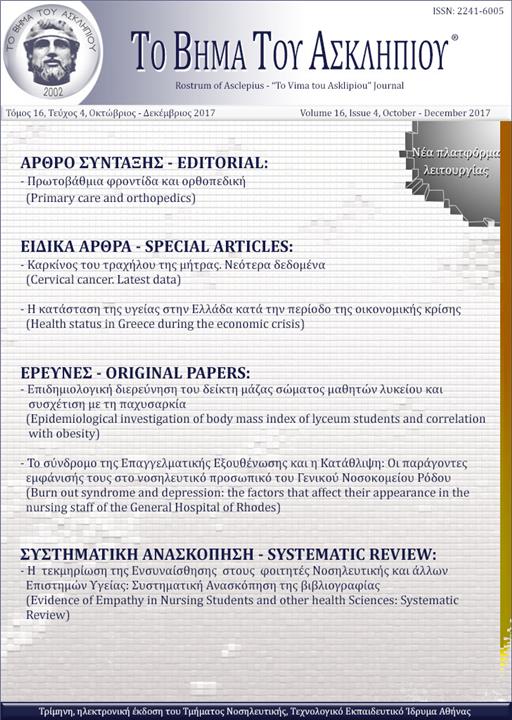 Cervical cancer is the second most common cancer in women after breast cancer.The frequency of the disease in advanced countries is 6-10/100.000 women and the majority of those women are 40-50 years old. International epidemiological studies have associated cervical cancer with risk factors such as age of first sexual intercourse, smoking, multiparity, family history of cervical cancer and low socioeconomic level.These factors have been associated with sexual behaviour, without forming independent epidemiological factors causing malignancies. Since 1974,when for the first time scientific studies have proven that HPVs(Human Papilloma Viruses) are sexually transmitted factors associated with cervical cancer, many studies have proven that HPV infection is a precursor for over 95% of cervical cancer cases. HPV infection is the only independent factor causing malignancy. Cervical cancer is controlled in the general population by a highly effective screening method, the Pap test, which has substantially contributed to reducing mortality from the disease. There is a need for providing women with more information on cervical cancer in order for appropriate prevention and treatment. Cervical cancer prevention is not only a personal responsibility and does not concern doctors only, but a network of prevention services within the national health system should be established.

Health status in Greece during the economic crisis | 258-270

The advent of the economic crisis brought consequences for the health of the general public with the result that the level of the health of the general public declined as did the level of the National Health Service itself. Recent epidemiological analyses indicate increased morbidity and mortality in the Greek population. Unemployment rates, which are growing geometrically, have contributed to an increase in the number of people who have no health insurance. This in turn causes the burden on the public health care units to increase because of the financial inability of the citizens to turn to private health providers. Due to the reduction in state expenditure, the suspension in hiring new staff or replacing those who have left, has resulted in the remaining staff being placed under great strain. Because of the crisis, and with the aim of restructuring the National Health System (NHS), reforms were instigated the first of which was the creation of a new health care system EOPPY(National Agency for Health Care Facilities) in 2011 and the implementation of new policies in the pricing of medicines and health services. Attempting to address the economic crisis within the framework of the health services requires financial consolidation and restructuring of the NHS. This should be achieved by strategic planning of needs, by the monitoring and evaluating of input and output and by policies controlling the abuse of health care and services by the general public. Despite the current negative impact of financial-credit crisis on health and health care, the same economic crisis can be a springboard to implement reforms that will strengthen the quality of the NHS and Public Health.

Introduction: Obesity and Overweight have negative health impact in adolescence, as well as in the long term, as there is an increased risk that these conditions may become chronic diseases in adulthood with numerous deleterious health outcomes and with attendant impacts on morbidity and mortality. Aim: The investigation of levels of Body Mass Index (BMI), an index of obesity, as well as factors that are related with this in students of lycee of municipality Salamine. Material and Method: The present study was prospective and took place in accidental sample of 123 students of lyceum from the 3 general lycea of municipality Salamine. In these students was shared questionnaire that concerned demographic and physical characteristics as well as their alimentary habits. For the analysis of factors which are related with the BMI we applied the multiple linear regression and for the processing and data analysis we used the statistical parcel of STATA. Results: The sample was constituted from 61 (49.6 %) boys and 62 (50.4 %) girls of age from 15.1 until 18.7 years (intermediate age 16.4 years). The medium BMI was 22.8 units for the boys and 21.6 units for the girls. From boys only 1 (1.7 %) individual was corpulent (BMI 30) though 10 (16.7 %) were overweight (BMI 25-30). In the girls there was none obese individual while 8 (13.3 %) individuals were overweight. The multivariate analysis revealed that the girls have on average lower BMI from the boys (p = 0.005) while older students had higher BMI on average from younger (p = 0.038). Also, students with change of weight in the last year (p = 0.011), attempt of diet at least once in their lives (p < 0.001) as well as those that declared bigger appetite for consumption of food (p = 0.013) had higher mean BMI. Additionally, students born in Athens had higher BMI (p = 0.020) while the frequent consumption of small quantity of food was correlated with lower mean BMI (p = 0.013). Conclusions: Obesity in adolescents is nowadays a major problem of Public Health affecting the quality of life and health of young people, but also the global economy. should A program on health education in adolescent students need to be applied, aiming to inform and change their thoughts and attitudes towards the hygiene alimentation and hygiene way of life.

Burn out syndrome and depression: the factors that affect their appearance in the nursing staff of the General Hospital of Rhodes | 288-308

Introduction: Burn out syndrome and depression often occur in social professions and health professions. As far as nursing staff are concerned, research shows that there is an increased risk of physical and mental health being affected by occupational exposure and depression. Aim: The aim of the present research was to explore of burnout syndrome and depression in nursing staff of the General Hospital of Rhodes. Methods: The data were collected from a sample of 150 nurses who work in General Hospital of Rhodes. The nursing staff was asked to complete an anonymous questionnaire consisting of the questionnaire MBI (Maslach Burnout Inventory) to assess the burnout and the PHQ-9 (Patient Health Questionnaire -9) to assess the depression. Data analysis was contacted by the statistical package SPSS 24. Results: Moderate to high levels were observed for the three dimensions of burnout in nursing staff. Many demographic, individual and work factors are positively related and affect the incidence of occupational burnout and depression in nursing staff. All three components of occupational burnout have been found to be related to "age". Depersonalization was statistically significant with the variable ‘salary’ (p=0.037) and the variable ‘working conditions’, while personal achievements with the variable ‘sex’ (p =0.05) and the variable ‘education’ (p=0.016). 83 nurses (80.6%) experienced depression in the mild form of it (39.8%). A strong positive association was observed between depression and emotional exhaustion with r = 0.7 and sig = 0.01. Conclusions: Early identification and identification of factors affecting the occurrence of burnout and depression is deemed necessary where the health effects of nurses are prevented through intervention by health care managers and appropriate preventive measures.

Evidence of Εmpathy in Nursing Students and other health Sciences: Systematic Review | 309-342

Introduction: Empathy is the ability to perceive the feelings and experiences of the other personand the ability to communicate it to the other person. It is necessary to cultivate this concept among the Nursing students and other Health Professions during their studies. Aim: The aim of this paper was the systematic review of research studies of Empathy Levels of Undergraduate Students in Nursing and Other Health Professions. Method: A systematic review was performed on the MEDLINE and CINAHL online databases and the GOOGLE SCHOLAR search engine. The basic prerequisite for the introduction was that only primary studies where chosen which used as sample Nursing students or other Health Professionals and that the publication was in English or Greek, between the years 2008-2017. Results: The review produced 17 articles that met the admission criteria. The results of the studies were classified into 3 main categories, namely: a) Empathy Levels of Nursing Students (n = 7), b) Comparative studies of the Levels of Empathy among Nursing and Other Healthcare Professionals (n = 6) and c) Educational Programs for Improving and Enhancing Empathy N = 4). The results are quite contradictory with some studies showing high levels of empathy, others showing a decrease of empathy levels with the progress of studies, particularly in relation to clinical practice, while the comparison between the various health sciences seems to not differ significantly. In relation to the educational programs some have resulted in increased levels of empathy and some not. Conclusions: Empathy remains a multidimensional phenomenon, this why its treatment will also be multidimensional especially with regard to education, either within the whole theoretical and clinical education program, or in the form of support and improvement programs.