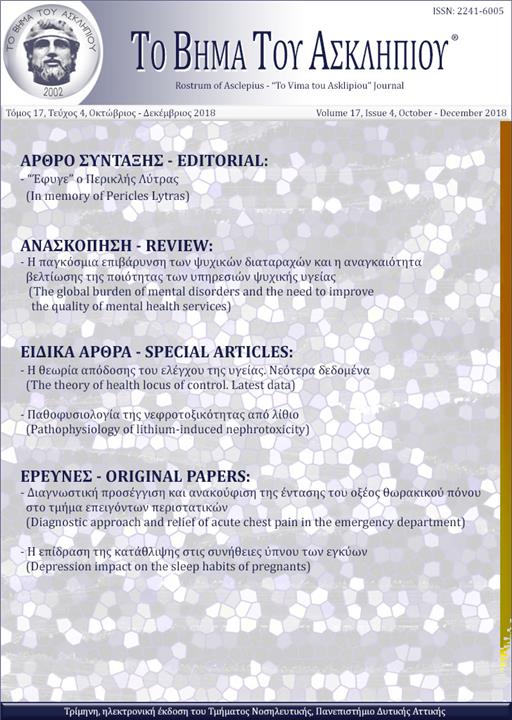 The theory of Health Locus of Control (HLC) refers to measuring people’ beliefs about whether or not health is determined by their behaviors through the Multidimensional Scale which introduced by Wallston et al. Internality and externality (internal and the two separated external dimensions of locus of control of “Powerful Others” and Chance) have been used as a predictor of various health behaviors in a large number of studies with a positive correlation, such as physical activity, medical teeth protection, diet, patients-doctors communication, medication adherence. Nevertheless, the Achilles' heel of HLC is due to weaknesses of the research tool itself (with the continual development of new subscales and the independence of its three dimensions), as well as the significant interactions of other psychosocial determinants, for instance age, gender, value of life, ethnicity, religiosity and social cohesion. In consequence, it is imperative to add and include components of other theoretical models (self-efficacy, the Theory of Planned Behavior etc.), which have been found to handle and clarify better other views and aspects of human behavior.

Despite having been discovered in 1800, the contemporary history of lithium salts in psychiatry began only in 1949. Lithium has proved to be a very effective treatment for patients with affective disorders. It can prevent both suicide and relapse in patients with bipolar disorder and is also effective as adjunctive treatment in unipolar depression. In spite of its well-known efficacy though, lithium is being used in clinical practice less often nowadays. Two of the reasons for this phenomenon are its narrow therapeutic index and its nephrotoxicity. The toxic effects of lithium in renal function began to trouble scientists approximately 40 years ago. Today, it is well documented that lithium can cause, in decreasing order of frequency, nephrogenic diabetes insipidus, chronic kidney disease and nephrotic syndrome. Unfortunately, chronic kidney disease may eventually lead to renal dialysis even if lithium administration is stopped. The relation between lithium treatment and manifestation of renal tumors has not been proved yet. The molecular and pathophysiological mechanisms of lithium-induced toxic renal effects are partially elucidated. Their knowledge increases the pharmacovigilance of clinical psychiatrist so as to use clinical examination and laboratory tests to properly detect or prevent renal side-effects and treat them in co-operation with nephrologists.

Introduction: Acute Chest Pain (ACP) of non-traumatic etiology is an important diagnostic problem and potentially life-threatening condition for the patient's life and is one of the most frequent causes for patients to arrive in the Emergency Department. Aim: The aim of the present study was to investigate the diagnostic and analgesic approach for the diagnosis and treatment of acute chest pain of non-traumatic etiology for patients presenting to the Emergency Department (ED). Material and Method: The studied sample consisted of 70 patients out of a population of 932 civilians attending the ED of a major General Hospital of Athens with main symptom of ACP, on general duty days over a 30-day period. Demographics, clinical findings, results of laboratory and imaging examinations, analgesic and other medications, and their outcome in the ED were recorded. The SPSS 21.0 statistical package was used to analyze the data. Results: Fifty-eight point six per cent of the sample consisted of male patients. The most frequent diagnoses were serious cardiovascular problems (40%), musculoskeletal disorders (24.3%) and psychological/psychiatric disorders (10%). Among those with serious cardiovascular problems the majority was diagnosed with acute myocardial infarction (57.1%). In most patients, ECG (98.6%), general blood (95.75%), cardiac ultrasound (77.1%) and troponin control (85.7%) were performed. At the present study, only 15.8% of patients received analgesics, despite the fact that they reported average pain (score 6.7 out of 10) on their arrival to the ED. However, a reduction of chest pain at exit from the ED was recorded, with an average score of 4.4, even at patients who did not receive any drug intervention. There were no differences in the diagnostic process, the character, the duration before the arrival and pain intensity in relation to gender. Also, there was no statistically significant relationship between the pain intensity score reported by the patient and the administration of analgesic treatment. However, the average time of administration of analgesic therapy to those who received was 25.9 minutes after arrival to the ED. The average waiting time in the EDF was 196.9 minutes. Conclusions: Although the diagnostic approach of the ACP appeared to follow clinical guidelines, this was not the case with the administration of analgesia based on pain intensity. Guidelines on pain management were not followed and fewer patients received analgesia.

Depression impact on the sleep habits of pregnants | 314-332

Introduction: Women are particularly vulnerable to major depressive disorder sometime throughout their entire lifespan. Their highest risk coincides particularly during pregnancy due to various hormonal, immunological, structural and functional changes that enable the safe delivery of the newborn. In addition, the right sleep habits are important since they help the mother to ensure the necessary maternal energy in order to handle the fetal needs. Aim: To investigate the assessment of depression impact on the sleep habits of pregnant women and its determinants. Material and Method: A cross-sectional study was conducted and the study population consisted of 100 women from mid to late-term gestation (second and third trimester of pregnancy). Data were collected by means of an anonymous questionnaire that was completed voluntarily by the participants. Results: A statistically significant correlation was found between the depression during pregnancy score and the sleep quality score (p<0.001). Among the participants, 25% pregnant women in the study were found to be suffering from depression, while 93% reported that they had insufficient sleep during the last month. According to multivariate analysis, pregnant women with a higher level of education, being in a relationship, being employed and having moderate support from their family environment had lower depression score while older women had lower sleep quality score. Conclusions: The observation of high rate of depressive symptoms during pregnancy and its effect on the sleep habits of pregnant women confirms the necessity of early diagnosis and preventive actions.