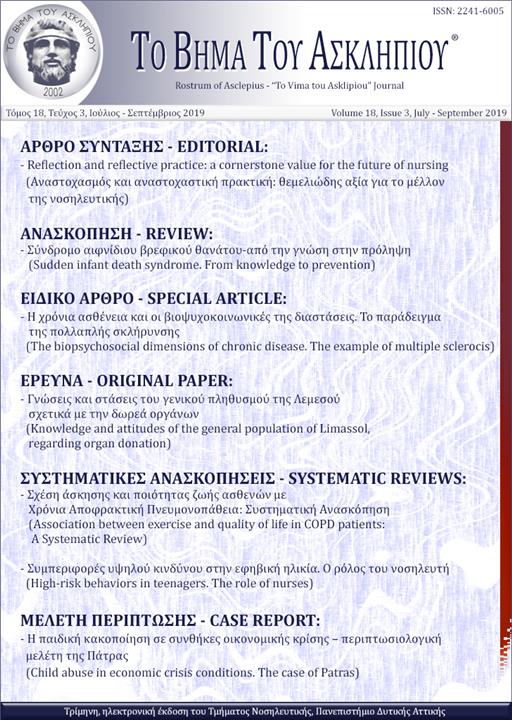 Reflection and reflective practice: a cornerstone value for the future of nursing | 200-203

Introduction: The Sudden infant death syndrome is one of the main causes of infant mortality. SIDS is defined as the sudden death of an infant under 1 year of age, which remains unexplained after a thorough case investigation, including performance of a complete autopsy, examination of the death scene, and review of the clinical history. Aim: The understanding of the pathophysiology, risk factors of the syndrome and knowledge and implementation of prevention strategies. Methodology: Review of studies on database Pubmed, Centers for Disease Control and Prevention, NHS Choices and American Academy of Pediatrics. Results: High risk factors are the prematurity, low birth weight, prone sleep position, exposure to passive smoking, overheating, the soft surface, loose blankets and use of drugs and alcohol from parents. Some recommendations to reduce frequency of syndrome are the increase of the breastfeeding, the nonprone position during the sleep, avoiding use pillows and soft mattresses and exposure of infants to harmful factors of cigarettes. Conclusions: Continuing research and training of health professionals and parents is necessary.

The biopsychosocial dimensions of chronic disease. The example of multiple sclerocis | 215-227

It is well-known that the pandemic of chronic diseases internationally and the meaningful consequences for the patients, the family and the wider social context call for their investigation. The experienced biological, psychological, social, economic and occupational repercussions of the patients are a major blow to their adjustment to illness. Adjustment is a complex, multifaceted and holistic process, a fundamental element of which is the explanatory style of psycho-compassionate events, and that -optimistic style- affects positively patients’ health and quality of life. The effects of Multiple Sclerosis (MS) are very grievous and painful not only for patients but also for their relative, especially for those who will assume the role of caregiver. A variety of psychosocial intervention programs are proposed to patients, their families, but also to two as a whole such as self-management, social support and the pilot model of Rintell & Melito. The Rintell & Melito model includes the collaborative education of families, which are close to the diagnostic reriod of MS (less than 12 months), in strategies that advance collaboration within the family, incorporating evidence from the theory of crisis intervention, psycho-educational care, and family-centered approaches.

Knowledge and attitudes of the general population of Limassol, regarding organ donation | 228-242

Introduction: The ignorance of the population regarding organ donation and their inadequate information affect negatively the growth of donors in Cyprus. Aim: To assess the knowledge and attitudes of the general population of Limassol, regarding organ donation and the factors that influence their decision. Methods: A cross-sectional study was conducted with a sample of 1200 people in Cyprus, in the Limassol province. The sampling method used was the sampling of convenience and the questionnaire completion was made anonymous in public venues from June to September 2014. Data analysis was performed with IBM SPSS 21.0. Results: Women with 56,7%, felt that organ donation saves lives (p<0.05) and would like to become organ donors. In addition, they knew that there was a waiting list for prospective recipients (p<0.05) and agreed that to remove an organ from the donor he must be brain-dead compared to the 43,3% to the men. In contrast, men with 40,1% were more likely to know if brain death was reversible (p<0.05), unlike women with 34,7%. The participants stated that they had no information about the issue of donation and whether they were informed by the media. Still, the attitude of the Orthodox Church remains unknown to them. Conclusion: There is no proper information on organ donation and therefore there is a shortage of donors.

Association between exercise and quality of life in COPD patients: A Systematic Review | 243-261

Introduction: The Chronic Obstructive Pulmonary Disease (COPD) can affect patients' quality of life (QOL). Aim: The aim of this systematic review was to investigate the association between exercise and QOL of patients with COPD following a respiratory rehabilitation program in organized centers of respiratory rehabilitation of hospital units. Material and Methods: A systematic review of papers published up until June 2018 was conducted. Search was performed on PubMed with the key-words: “COPD”, “Chronic Obstructive Pulmonary Disease”, “physical activity”, “exercise”, “quality of life” and “QOL” as well as on IATROTEK-online with the key-words: “Chronic Obstructive Pulmonary Disease”, “COPD”, “quality of life” and “exercise”. The criteria for inclusion in this review were: the QOL assessment has been done with the Saint George's Respiratory Questionnaire (SGRQ) and the content of the studies concerns the evaluation of the QOL of COPD patients following respiratory rehabilitation programs in organized centers of respiratory rehabilitation of hospital units. Results: Only 9 of the scientific papers retrieved met the criteria for inclusion in this review. The exercise was found to affect the QOL of COPD patients positively. Although, the degree of improvement in both the overall score and the scores of the three subscales of the SGRQ was not the same in all studies but varied significantly depending on the type of exercise and the limitations of each study. Conclusions: The QOL of patients with COPD was improved after the integration of rehabilitation programs that were performed in specialized respiratory centers of hospital units.

Introduction: Adolescence is a developmental age characterized by conflicts, emotional instability, psychological and physical changes that pose various health risks such as unsafe sexual behavior, risky driving and substance dependence. Aim: A systematic review aimed at capturing the factors that are due to dangerous behaviors and which include teenagers in the high risk group. Methodology: Systematic review of studies that have analyzed issues of puberty behavior. The search for relevant domestic and international bibliography was conducted in the Google Scholar, Scopus, Science Direct and PubMed online databases, covering the 2008-2018 period, with keywords to identify the appropriate articles/ studies and setting selection/ exclusion criteria for their inclusion in the job. Results: Dangerous behaviors are a complex phenomenon and are largely influenced by the social context in which young people live. Adolescents are generally regarded as one of the healthiest populations compared to other age groups. However, the literature highlights the substantial risk of mortality in this age group at a global level, which is mainly due to high-risk behavior in adolescence. Conclusions: The reduction in adolescent mortality due to high-risk behaviors is demonstrated through the implementation of appropriate strategies including, among others, access to contraceptive methods and the organization of family planning services, training and support for young girls on safe pregnancy termination, policies for greater safety in driving and avoiding accidents, organizing mental health services for teenagers.

Child abuse in economic crisis conditions. The case of Patras | 281-307

Introduction: The phenomenon of child abuse is a major social pathogenesis factor to the extent that it affects behaviors and attitudes, which are magnified in conditions of economic crisis. Aim: The emergence of abused child’s profile, the investigation of the type abuse and its aggravating factors, as well as the highlighting of the health system deficits both in central and regional level of the Municipality of Patras. Material and Method: The survey sample formed to 148 reports, out of the total 209, from the archives of Child Protection Group (O.Π.A.), Municipality of Patras from 2012 to 08.31.2016.Data analysis was performed with the IBM SPSS 20.0. Results: The 54.73% of children who are abused are boys, the 58.9% attend ordinary school and the 65.3% are pupils of primary school. The majority (61.9%) live with one parent. Neglect is the most common type of abuse (61.5%) with physical abuse following in the second place (25%).61.6% of families have low incomes and live in the South Apartment of Patras with the almost 30% to live in bad - dangerous conditions. 71% of mothers and 39.4% of fathers are unemployed. 50.5% of neglected and / or abandoned children and 40% physical and / or sexual abuse reside in the southern district of Patras, while 40% of minors who have been mentally abused live in the arctic. Conclusions: Our survey showed that child abuse and especially neglect is influenced by low socio-economic family profile, while mental abuse occurs in medium and high socio-economic households. There was a change in the type of abuse, as well as the direct relationship between unemployment, educational level and the living conditions of the child's family.