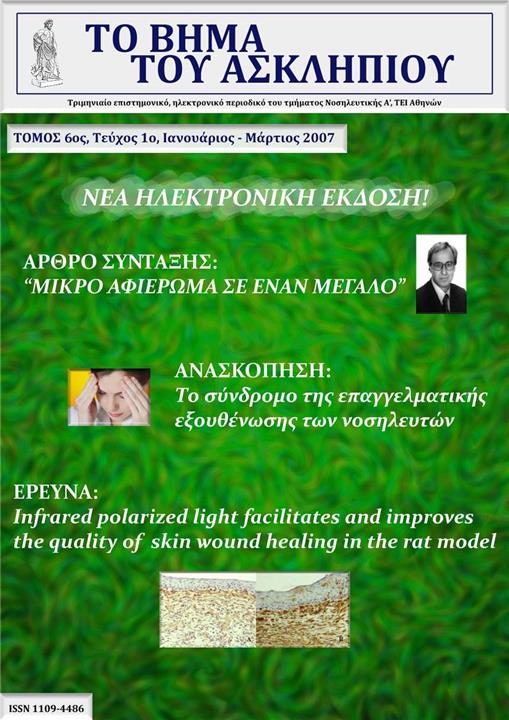 The female athlete triad is a syndrome which consists of eating disorders, amenorrhea and osteoporosis. The syndrome is increasing in prevalence over the last thirty years, as more women are participating in sports at a competitive level. The aim of the present study was to review the research data regarding the female athlete triad in order to under- line the significance of the problem.The method οf this study included search of international medical and nursing literature data-bases, for the reason that the female athlete triad has been extensively studied after 1990. The results from the review of relevant studies showed that female athletes who follow hard preparative athletic programmes in which body weight is critical for success, often manifest eating disorder patterns. These lead to dysregulation of the hypothalamic-pituitarian-ovarian axis (HPO) and as a result to amenorrhea. Hypothalamic amenorrhea can lead to osteoporosis and increased fracture risk. Adolescents may particularly be at risk because it is during this crucial time that females attain their peak bone mass. Conclusively, a course of action that aims at preventing the occurrence of the syndrome is necessary. Prevention of the female athlete triad through education and identification of the athletes at risk may decrease the incidence of long-term catastrophic effects to health. Monitoring from a group of specialists should serve as a cornerstone when planning a program of training and preparation for high athletic performance.

Chronic infection from the hepatitis C virus (HCV) is one of the most common infectious diseases worldwide. It is estimated that more than 170 million people worldwide are infected by HCV. HCV is responsible for the 70% of cases of chronic hepatitis, the 60% of cases of hepatocellular cancer and the 30% of liver transplantations. Therapy of chronic infection from the HCV aims to the: a) eradication of the virus from liver and blood and sustenance of undetectable serum HCV-RNA after the end of the treatment and b) stabilization or improvement of liver histological status. In 80’ physicians treated chronic hepatitis C by using interferon alpha (IFN-α), whereas few years later they added ribavirin to the treatment. The combination therapy of IFN-α and ribavirin had had better results, but many patients left untreated. In 90’ IFN-α was replaced by pegylated interferon alpha (PEG-IFN-α), with or without the use of ribavirin. In this study the following questions are answered: a) which patients should be treated? b) what are the appropriate clinical and laboratory tests before treatment? c) which is the most effective therapeutic scheme and which is its duration? and d) which is the appropriate surveillance of the patients, especially after the end of the treatment? Additionally, there are mentioned the most common adverse effects of interferon and ribavirin treatment, which are in many cases the cause of altering the treatment

The aim of the present study was to investigate the effects of polarized-infrared light on secondary skin wound healing of full thickness skin wounds in a rat model. Full thickness skin wounds sized 2 by 2 cm were surgically inflicted in two groups of male Wistar rats, 20 animals each. In the first group (experimental group - EG) the animals were exposed 7 min daily to polarized-infrared light produced by a BIOPTRON device. In the second group (control group - CG), the animals were subjected to the same procedure, but with the device not activated. Mice were sacrificed on 0, 5th, 10th, 15th and 20th day, following the infliction of skin defect. Size and healing process of each wound were recorded and evaluated by means of planimetry and histological examination. Skin biopsies were taken from euthanized rats and histological examinations were prepared. According to our findings with the planimetry evaluation, there was acceleration of the healing process in experimental group, whereas an improvement of healing process was identified at each time of histological examination, compared to the control group

The obstetrical care of Albanian women living in Greece | 46-54

In the last years there has been observed an increase of Albanian economic immigrants living in Greece with their families. During their pregnancy Albanian women rely on Greek hospitals for obsteatric follow-up as well as the the benefits of proper medical care at childbirth. The sample of our study constituted of 175 Albanian new mothers who gave birth in a big public hospital of Thessalonici. The majority of these women stated that they were satisfied with the obstetrical care offered even though some of them didn’t have a complete follow-up during their pregnancy and they had feet fear upon entering the hospital.