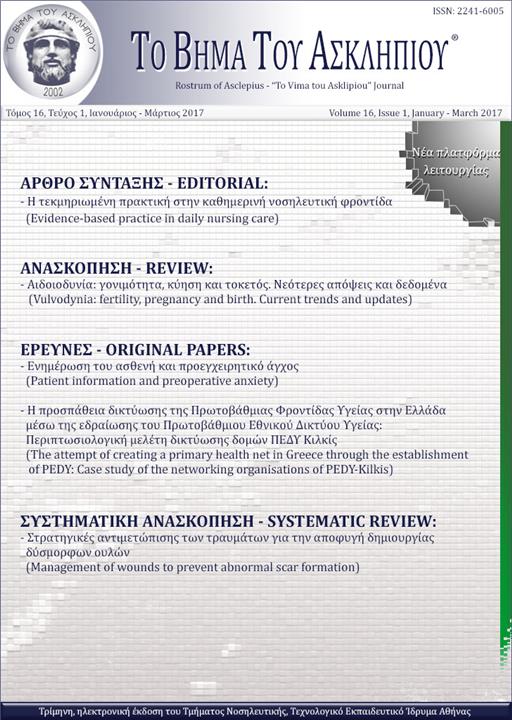 Introduction: It has been reported that approximately 11.3% of sexually active women of reproductive age will present with vulvodynia at some time point in their life. The pathogenesis of this disorder is unknown. Vulvodynia has significant implications for the sexual life and psychosomatic health of women affected by this. Objectives: Our objective was to provide a brief description of the most recent trends on the issues of fertility, pregnancy and birth in women suffering from vulvodynia. Material-Method: Literature review with use of the databases Medline, Scopus and Embase between 2005-2016 and with the following key words: vulvodynia, subfertility, labour and delivery. Results: On review of the literature there are few reports on the issues of fertility and the pregnancy and birthing features of women suffering from vulvodynia. Epidemiological studies have shown that women with vulvodynia are Caucasian, 20-30 years of age, with a high educational and financial status. The studies show that these women have smaller rates of pregnancies when compared to the general population due to relatively less sexual activity due to pain during intercourse. Women with vulvodynia have a higher rate of cesarean section (CS) in comparison with the general population, which is attributed to maternal request instead of true obstetric indications. The neonatal outcomes and the use of epidural analgesia are similar between women with vulvodynia and those without. Conclusions: Both health practitioners and women need to be properly consulted and informed about this entity of vulvodynia especially in terms of fertility, pregnancy and birth.

Introduction: Surgical procedures include invasive surgical techniques that affect the patients’ physical and psychosocial status and increase the levels of anxiety. Aim: To assess the relationship between the preoperative information provided to surgical patient and the preoperative anxiety. Methodology: The research study took place between September and December 2015 using a descriptive correlational design. The study sample consisted of 124 surgical patients of a general hospital of the region of Attiki, Athens. Inclusion of participants in the study was based on specific criteria. Data were collected by using a questionnaire, developed by the researchers after an extensive literature review and the anxiety depression scale HADS (Hospital Anxiety and Depression Scale). Ethical procedures were taken into account throughout the research study. Data analysis was performed using SPSS 19.0 statistical program. Results: The majority of the patients (70.2%), stated that they were satisfied by the amount of information provided, while 56.1% stated that they wished to have some additional information. Most of the patients (86.1%) reported that the preoperative information provided before surgery was very beneficial to them. The outcome of the surgical procedure (56.5%) and postoperative pain (48.4%) were strongly associated with preoperative anxiety. The desire for more information was positively correlated with depressive symptoms. Patients who wished to obtain detailed information before surgery and those who felt that the information was beneficial to them before surgery were less likely to develop symptoms of depression. The high educational level of patients appeared to have a positive correlation with preoperative anxiety. Conclusions: Provision of information at a preoperative stage can reduce preoperative anxiety and depressive symptoms. Further investigation is essential taking into account the unique characteristics and the specific needs of the patients.

The attempt of creating a primary health net in Greece through the establishment of PEDY: Case study of the networking organisations of PEDY-Kilkis | 33-47

Introduction: Primary Health Care is based upon the principles of universality and equal accessibility in a patient-oriented health care system with continuous capacity adapting to ongoing socio-economic changes. The efforts of creating a primary health care net in our country remained so far unfinished or meteor while the inability of tackling chronic pathogens of the health care system is more than evident. Aim: To assess the continuing weaknesses of the existing frame created after the establishment of Primary National Health Care Net and, on the other, to utilize information by adjusting to internationally successful networking practices of other countries in order to exercise effective health policy, taking into account the theoretical framework of implementation in Greece. Methodology: A cross-sectional study was conducted during the period June to August 2015 using convenience sampling while the study population consisted of the patients who had used the services provided by the Kilkis PEDY primary health care unit during the previous year. Data were collected by means of an anonymous questionnaire that was completed voluntarily by the participants while a pilot study was conducted on 30 participants. The statistical analysis was performed using Statistical Package for Social Sciences (IBM SPSS), version 21.0. Results: Only 13.3% of the respondents declared adequate interconnection among the health care unit of PEDY Kilkis and primary or secondary health structures while 44.1% reported problems in meeting their needs because of the non-operation of the health care unit beyond the morning hours. It is also expressed greater confidence in private physicians (64.1%) and incomplete information concerning the right of providing health services by the PEDY health care unit to the uninsured (72.4%). Conclusions: New health policies should be applied at primary health care level so as to combat the problematic areas of health care networking in our country and focus on establishing a patient-oriented model.