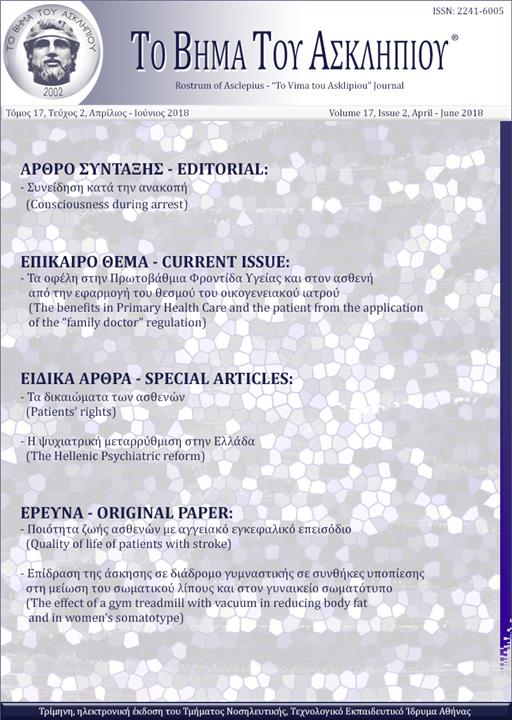 Primary Health Care (PHC) was established as a concept in 1978 in the Alma-Ata conference in Russia. The declaration of the World Health Organization rendered PHC the linchpin and the first point of contact of citizens with the National Health System. In Greece, it was included in Law 1397/1983 on the National Health System, but not fully adopting the content of the declaration. The main diversion from the declaration mentioned above was the non-obligatory contact of citizens with the commissioned structure of the PHC, the family doctor. This fact, in connection with the non-realization by the administration of the legislative requirement for urban-type health centers, within which the family doctor is active, has supplanted both his role and the PHY itself. The reasons for this practical approach were the different political ideologies, corporate and professional interests, as well as the lack of personalized adaptation of the legislative regulations to Greek reality. On the contrary, in Great Britain, the full implementation of the declaration has rendered PHC and consequently the institution of the family doctor high in the consciousness of wider social acceptance. Few legislative reforms have been made in terms of adapting the new data of harmonization to the reality of Great Britain, making it a long-standing,healthy health care system. In any case, an adapted function of the institution in the culture of the host country is considered imperative and essential because of the manifold positive manifestations in the health system and patients, as demonstrated by its excellent functioning in Great Britain. Keywords: Primary Health Care, National Health System, family doctor, National Health Policy.

Health care constitutes a basic social right for all citizens and its protection is not only social, but also an individual right. Patients' rights are now guaranteed by legal texts of both international organizations and the Greek legislative framework. These refer to the dignified treatment of health care users, the elimination of discrimination, the right to informed consent and privacy, the right to respect for personal convictions and peculiarities, the protection of privacy, free choice and access to medical privacy. In our country there are various Institutions for the Protection of Patients' Rights, such as the Independent Patient Rights Protection Office and the Health and Social Solidarity Ombudsman, while in each Hospital there is provision for the establishment of a Commission for the Control of the Protection of Patients' Rights, a Citizens' Office for the Protection of Health Care Holder Rights. Although the rights of patients in our country are protected, it is increasingly obvious that the economic crisis, in an indirect way, is opposed to the principles of access, equality and the provision of high quality health services to patients. However, it is clear that the implementation of patients' rights is a duty of all those involved in the Health System, while the degree of their realisation is an indicator of the social level of any country.

The Hellenic psychiatric reform has constituted the trigger for the de-institutionalization and outpatient treatment of the mentally ill. Until the end of the 20th century, conditions in the inadequate national network of mental health services had been inappropriate. In 1981, the year that Greece joined the European Union, the member-states encouraged Greece to make fundamental changes by modernising the sector of mental health. The purpose would be to create a national reform programme for establishing community psychiatry, closing the country's psychiatric hospitals and deinstitutionalizing long-term mental patients. This project was designed and financed by the European Union and the Greek Ministry of Health. This review focuses on the content and implementation of the Hellenic psychiatric reform and of the national programme “Psychargos”. Through the years, the existing structures providing mental health services have been modernised and many new ones have emerged. The Ministry of Health, however, making an account of the planning for years 1984-2009 notes that focus was primarily given to releasing mental patients from psychiatric hospitals rather than developing community structures. Despite the problems that psychiatry reformation has to face, and in spite of the considerable work accomplished, the service network remains in adequate.

Introduction: Body image and health are a strong concern for all people, and especially for women. Few studies focus on investigating exercise on a gym workout under vacuum and its effect on reducing body fat and female body shape. Aim: To explore the effects of aerobic exercise on a gym workout under vacuum conditions in 30 women aged 25-50 years, with specially designed protocols lasting 12 weeks. Material and Method: The tools of quantitative and qualitative research were: (1) Measurement Protocol, (2) Observation Protocol / Calendar and (3) Axis Questionnaire used in semi-structured interviews with the objective of obtaining information on the knowledge, perceptions and attitudes of the respondents, on the subject of the investigation. Two Groups were formed with 15 women each: Experimental and Control. Both groups followed a specially designed nutritional protocol. Results: The observed reduction in body fat in the Experimental Women's Group was impressive. The socio-economic factors that contributed to this statistically significant reduction were investigated in relation to the women in the Control Group. In addition, the changes related to the existing somatotype were investigated. The reduction in body fat levels, as a result of exercise in a treadmill under vacuum, is considered statistically significant. The number of sessions is statistically significant in reducing fatty tissue in women aged 41-45 years, the highest rate of body fat reduction is observed. The “apple” somatotype scores the largest reductions in the Treadmill with vacuum Group, and the orthogonal somatotype in the Control Group. Conclusions: Exercising on treadmill with vacuum results in a statistically significant reduction of body fat levels of women, decreasing the BMI and the abdominal skinfold and affecting the female somatotype.