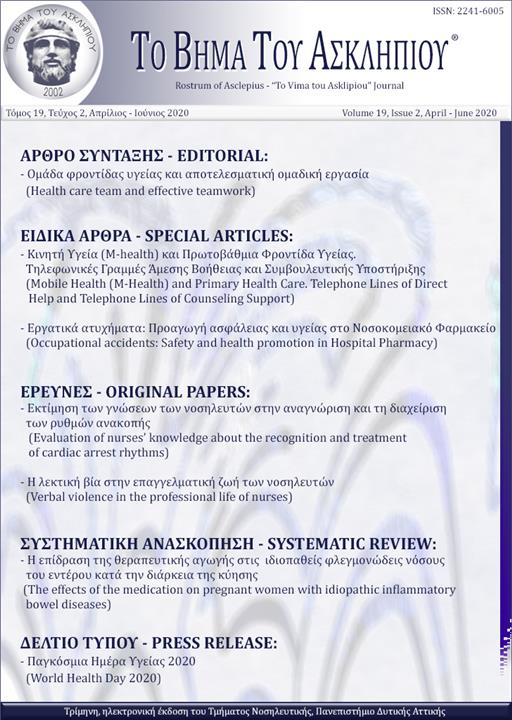 Mobile Health (m-health) covers a wide range of services in the field of Primary Health Care. Telephone lines of direct help and counseling support telephone lines, through which people have access to health services via an emergency call number, are the most widespread categories of mobile health (m-health). The emergency and counseling telephone lines are developed both by public and private bodies and provide medical help, guidance and referral to specialist doctors in emergency situations. They also offer counseling and psychological support to people with chronic illnesses, to people with issues of negative social impact, but also in cases of prevention and public health. The use of help lines overcomes the barriers related to accessibility and high costs, reduces the waiting lists and provides anonymity. The operation of telephone helplines ensures basic principles of Primary Care as it ensures an easy access, the proximity of their services at the place of residence and the care of vulnerable and sensitive population groups.

The cost of accidents at work translates into both financial and non-monetary terms. An accident at work is considered to be the result of any injury to the employee by a violent or unexpected incident during or because of work. The factors that cause accidents at work are related to the materials being used and the technical equipment involved, the working environment and working conditions, as well as the human factor itself. In an environment dealing with health the factors are further categorized as physical, chemical, biological, ergonomic and psychosocial. Within the hospital pharmacy a desirable action plan for safety and health at work focuses on a well functioning environment operating within strict specifications, continuous training of all staff involved, differentiated waste management and rotation of responsibilities for the protection of mental and physical health during repetitive work. The effort in implementing workplacehealth and safety promotion programs is always and primarily aimed at achieving maximum productivity of the workforce. The action plan focuses on adapting the work to the capabilities of the staff by checking their suitability, and each time requires systematic study and methodologies to achieve the desired results.

that health professionals be familiar with cardiac arrest rhythms so that they can easily recognize and react. Aim: To evaluate the nurses' level of knowledge in cardiac arrest rhythms, as well as the potential factors affecting it. Material and Methods: Prospective cross-sectional study has been conducted in four (4) hospitals located in Attica, Greece, between July and September 2019. A hundred and eighty-four (184) nurses participated in the survey as subjects. The collection of data was taken by a special self-completion questionnaire, which was completed voluntarily by the participants. The correct answer of twelve (12) questions, out of sixteen (16) in total, (75% of the questionnaire) was defined as adequate knowledge level. Descriptive statistics, comparisons with non-parametric tests (Chi-squared test [χ2], Mann-Whitney, Kruskal-Wallis and Spearman) and Logistic Regression with nurses' knowledge level as the dependent variable have been used (SPSS v.24, p≤0.005). Results: One fourth (25%) of the participants seemed to have an adequate knowledge level. The level significantly varied depending on the subject's postgraduate institution (p=0.046), the work department (p=0.05), the frequent observation of a patient's continuous cardiogram (p=0.000) and the self-evaluation level when it comes to recognition and treatment. In multivariate logistic regression, it was found that nurses who rarely monitor a patient's cardiogram had a 95.2% smaller chance to be efficient than those who daily check it over (OR:0.048, 95% CI: 0.005-0.417, p=0.006). Conclusion: The level of recognition and reaction to cardiac arrest rhythms was low among nurses. Taking this into account, it is important for nurses to be systematically and constantly educated in cardiac arrest rhythms.

Verbal violence in the professional life of nurses | 138-158

Introduction: Verbal violence is a common social phenomenon that is also observed in nursing science workplaces. Aim: This research project was aimed at investigating the phenomenon of verbal violence in the professional life of nursing staff. Material and Method: The sample (N=168) consisted of nurses working in clinics, care units, health centers in both the public and private sectors. The data collection was done using the Greek version of Verbal Abuse Scale questionnaire (VAS-GR). Results: The survey revealed that at a rate of 97.6%, nursing staff of all ages has been victim of verbal violence. 28% of the sample thinks the insane jesting appears fairly often, while 29% says that intense criticism and accusations of accusations and accusations often appear as forms of verbal violence. The relationship with the abuser seems to vary with the immediate superior having accumulated the highest percentage of 21.4%.Regarding the frequency of the phenomenon, much of the sample (26.8%) replied that the frequency rate reaches up to more than once a year. 52% considers the episode of verbal violence from fairly to very stressful, while the vast majority of the sample indicates enough or too much anger. More than 50% of the respondents consider an acceptable approach to addressing possible victimization, focusing as the main long-term consequence of non-satisfaction. Young age groups have found controversial occupations to deal with stress, while women tend to blame themselves more than men. Finally, it should be noted that the sample reliability test was very high (Cronbach's alpha index = 0.957), indicating that the results of the survey can be generalized. Conclusions: The nurse in his working environment is often confronted with episodes of verbal violence, mainly affecting his mental health and hence his sustainability in the workplace. The urgency of identifying the factors involved in creating the phenomenon of violent verbal behavior in the workplace of the nurses and in its effective treatment is therefore urgently needed.

Introduction: Idiopathic inflammatory bowel diseases are chronic illnesses, due to immune system disorders, in people with genetic predisposition. IBD often affects women of reproductive age and several medications are available for the treatment of IBD. Since long-term administration is often necessary, required in daily clinical practice to ensure the best possible safety of pharmaceutical treatment during pregnancy. Aim: Investigating the effect of medication on pregnant women with IBD and in addition the effect of drugs on the fetus and the outcome of pregnancy. Method and material: This is a systematic review in which the bibliography research was conducted through electronic databases (Pubmed, Google Scholar, Scopus) in order to identify all prospective, retrospective, cohort studies and controlled randomized or non-clinical trials, which assess the pregnancy outcome under the influence of medication for the treatment of IBD on pregnant women with IBD. Research was made for articles within the period from January 1995 to December 2019,298 studies were found, of which 36 met the criteria. Results: Data analysis shows that the drug treatment of IBD during pregnancy is of low risk in antibiotics and steroids, while metronidazole and ciprofloxacin should be avoided in the first trimester. Aminosalicylics (with the possible exception of Asacol) are considered together with immunomodulators (Thiopurines) and biological agents (anti-TNF) are considered safe to be used during pregnancy. There are insufficient data for the safety of the use of anti-integrins and anti-interleukins. Methotrexate and Thalidomide are contraindicated in pregnancy due to their teratogenic action. Conclusions: Studies have shown that the drugs used to maintain the IBD in remission, except for methotrexate and thalidomide, are of low risk during pregnancy and lactation. Side effects of drugs reported during pregnancy appear to be more related to the activity of the disease than to the drug itself.