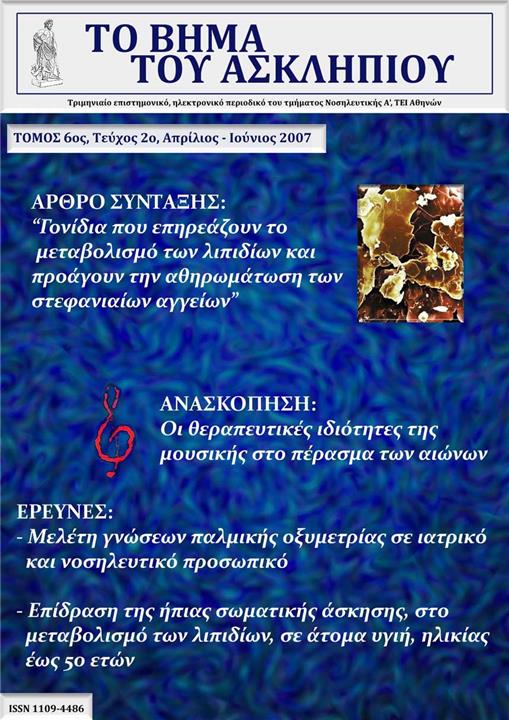 The therapeutic properties of music throughout the centuries | 66-74

The aim of this review is to present the therapeutic properties of music and its effect on both mental and physical illness, throughout the centuries as it is presented in published studies. Six articles from the international bibliography and fourteen articles from the Greek bibliography are reviewed in order to present the utility of music as a therapeutic method through the centuries and as an alternative healing method of nowadays. Ancient Greeks used refrains for the healing of men and animals and to prevent difficult and disastrous weather phenomena. Egyptians used to believe that musical notes hold magical powers. In African culture; music has an important role in healing ceremonies. According to the ideology of Greek philosophers the aim of healing is to restore the disturbed balance between body and soul. In classical ages, as Harmidis says, the treatment of headache is consists of the using of leaves from a certain plant in combination with specific refrains. Without chanting those refrains the medicine is useless. We are informed by the writing of Seneca that Maecena used music to eliminate fear so as to fall asleep. ΤΟ ΒΗΜΑ ΤΟΥ ΑΣΚΛΗΠΙΟΥ | ΤΕΥΧΟΣ 2ο 2007 2 In Renaissance, the era of conquers and philosophy, art and science, medicine was renewed and sow as music which gained human experienced basis and ability to express. In Islam, the dominant belief is that body is the house of soul and therefore the body will keep on complaining until the soul is healed. By the 20th century scientists have neither observed nor studied the effect of music in physiological parameters in the human body. In 1950, the American Society of Music Therapy was founded and so it formed the first center of clinical implementation and research of music therapy

Elderly patients’ views and their interaction with health care systems are very important as the subpopulation of older people in the European Community is increasing. Αim The objectives of this project were the observation and recording of certain changes that occur in psychological state of elder patients during their hospitalisation and a comparison between Greek and British patients. Material And Methods The sample of this pilot study consisted of 145 elder patients in Greece and British hospitals. Data was collected through a semi structured interview. Results The analysis of interviews revealed the following psychological parameters: Prospect, Acceptance of illness, Fear of death, Loneliness, Feeling of abandonment, and Suicide tendencies. The country of origin has the bigger effect in the parameters "Loneliness" and "Fear of death". The British patients experience extreme loneliness while fear of death is predominant among the Greek sample. Conclusions British patients seem not to fear so much death itself but rather life which is dependent to others and the pathological situations that will bring embarrassment against himself and others. Therefore, some of these patients have a tendency to discuss euthanasia rather express suicidal ideas, which however remains a complicated subject with various ethical, legal, religious and moral issues involved.

Knowledge of pulse oximetry among medical and nursing staff | 94-101

The pulse oximetry is a widely used non invasive method for monitoring the arterial oxygenation. The doctors and the nurses are persons which are in charge for right interpretation of measurements, receiving suitable interventions for the management of patients. Aim: To assess nurses' and doctors’ knowledge of pulse oximetry and identify training needs. Material and method: Participants in this study were 376 doctors and nurses from critical and general care settings in seven hospitals in Greece. The data collection was done through a self-administered questionnaire. Frequency of use, critical care experience, and opinions about education needs were included in demographic data. The knowledge test consisted of a 15 item, multiple-choice questionnaire, designed by researchers based on international bibliography. Results: A 70,7% of participants, use pulse oximeter often and 66,3% consider that is very useful in daily clinical practice. 83,7% didn’t have some type of past education while more than 81,4% believes that they need further education. The average score for all (on a 15-point scale) was 8,5. Ιn particular, the average score for each team had as follows: 10,5±2,7 for the specialized doctors, 9,6±3,1 for residents, 7,8±3,3 for the nurses and 7,4±3,4 for the nurse assistants. Low percentages of right answers were observed mainly in the questions about principles on which the pulse oximetry are based, clinical application and limitations, as well as normal ranges. Conclusion: The comprehension of pulse oximetry is insufficient, mainly in the nursing staff while totally is observed the need for further education

The relation between the class attendance and the performance at final examinations of students, in Nursing HTEI of Athens | 102-111