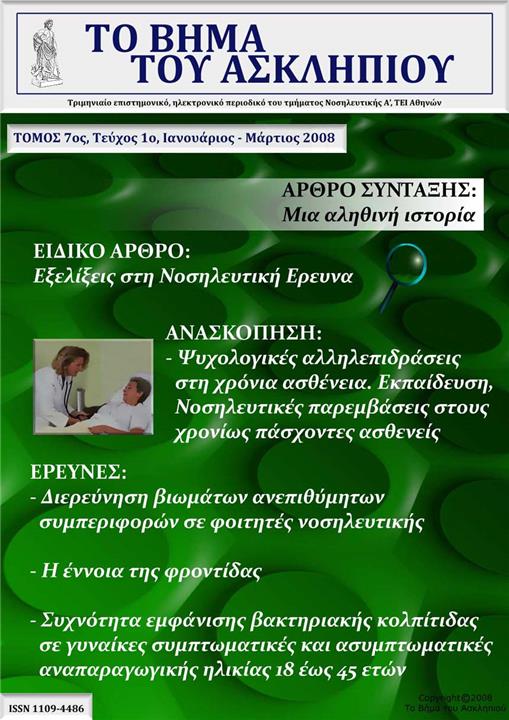 Most of the diseases that the modern person faces in developed countries are chronic. These illnesses in their majority are not cured finally, but constitute situations that we try to control. The use of pharmaceutical medicines and the changes in the life of an individual allow henceforth in the chronically patients to live for along time duration an almost "physiologic" life, even if the chronic disease continues accompanying them. It is already known in all the interdisciplinary health care team that the chronically suffering patients present an enormous variety and differentiation of behaviours and experience abundance biological, psychological and social problems. This ascertainment led the researchers to develop a wide spectrum of theoretical approaches and clinical applications, with basic protractor of their efforts the maintenance of life’s quality as much patients who bear from chronic diseases as their familial environment. Aim of the present literature review was to investigate all the factors that interact in the psychology of an individual at the event of chronic disease, to report all the ways of adaptation in the new situation, and to assign all the nursing interventions that contribute positively in the acceptance of chronic illness. The education of patients with chronic diseases constitutes the corner stone of right therapeutic confrontation. The acceptance by the patient of changes that is required in his way of life is easier provided that when he has completely comprehended the nature of his illness, the gravity of his situation and role that plays the right collaboration with the health care providers.

Developments in the Nursing Research | 4-11

Introduction: From the literature review it derives that the concept of care is multidimensional. Every individual forms a specific attitude towards care depending on the particular social framework he/she has been raised in as well as his/her religious beliefs and cultural background. The theoretical framework of the research is based on both selected terms of meaning of “care” as well as on selected principles of intercultural Nursing care as they have been described by Leininger (1997). According to Leininger, Nursing care as a phenomenon is met in all civilizations while there are particular cultural care standards. The aim of this research is semantic determination of care and therefore, how the Greeks perceive the meaning of Care. Methodology: To answer the above research questions, we chose the approach of phenomenological research method. The collection of data has been accomplished with the method of interviews with open questions. Then, the analysis of the interview data followed in accordance to the technique of content analysis with the Mayring method (summary).Result: From the content analysis the following categories derived: 1. Care means love 2. Care means understanding 3. Care means prevention 4. Care means touch Conclusions: The semantic approach of care as it is perceived from the individuals, accentuates in fact the thesis that the philosophy of nursing science is based on ideals and universal values, whose respect from the professional ensures high quality in provided care and promotes the nursing work for the benefit of the individual and the society, too.

Aim: The aim of the current study was to investigate the frequency of development of bacterial vaginitis (BV) in women of reproductive age, aged 18 to 45 years old. Those women undertook a microbiological examination of vaginal secretion either in the context of preventive control or because of the appearance of clinical symptoms. Material and method: A microbiological test of vaginal secretion was done in 500 women of reproductive age, aged 18 to 45 years old. Those women came for examination, either in the context of preventive control or because they had disturbing symptoms in the genital area. The following factors were recorded: age, existence of clinical symptoms such as itching, burning, excessive vaginal secretion, pain, as well as history of vaginitis. During the sample intake, the presence of pathological secretion, rush or pain were recorded. The diagnosis of bacterial vaginitis was based on the Amsel’s criteria. Results: Out of the 500 women of reproductive age, BV was detected to 145 (29%) and 33% of them were asymptomatic. 86,2% of the women reported excessive smelly vaginal secretion. Furthermore, 95,8% of women were found with excessive vaginal secretion and last but not least in 73% of women, pain was detected. History of vaginitis was reported by the 83,3% of women with BV. Conclusion: It can be argued that BV was detected in a great number of women of reproductive age. The high percentages of asymptomatic women with BV, as well as the serious complications, and the fact that BV constitutes a predisposition factor for infection with HIV, impose the application of preventive laboratory control in order to avoid bacterial vaginitis.