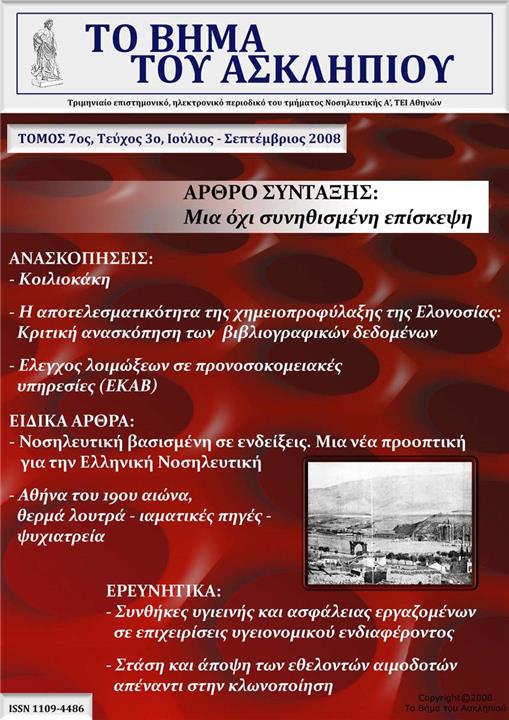 Celiac disease is a small intestine disease caused by the immunological response to gluten, a component of wheat, rye and barley. The worldwide prevalence of celiac disease ranges between 0.2% and 2.2 %. The clinical features of celiac disease includes diarrhea, steatorrhea, flatulence, abdominal pain and weight loss. The asymptomatic type of celiac disease is characterized by soft or normally shaped stool, weakness, lassitude and moderate weight loss. In children, celiac disease usually arises between the first and the third year of age, with diarrhea, flatulence and low weight. The malabsorption in small intestine causes many extaintestinal manifestations, such us anemia, bone abnormalities, hemorrhage and neuropathy. Celiac disease is diagnosed by histological examination of tissue samples taken by duodenum due gastroscopy and by the detection of certain antibodies in blood (anti-GL-IgG, anti-GL-IgA, ΕΜΑ-IgA και anti-tTg-IgA). The only therapeutic approach to celiac disease is a gluten-free diet and, if it is necessary, the administration of iron, folic acid, calcium and vitamins (K, B12). The prognosis of celiac disease is excellent, if there is an early diagnosis and the patient keeps for life a gluten free diet.

The efficiency of malaria chemoprophylaxis | 180-200

Introduction: Malaria is a highly contagious disease. According to WHO, malaria cases are expected to increase due to climate changes. Despite the eradication efforts, malaria still remains one of the most significant causes of morbidity and mortality in tropical and subtropical regions. Many different antimalarial regimens are used , however resistance is emerging to many of them Purpose: This critical review was conducted, in order to respond to the following questions. A) Which antimalarial regimen is most effective? B) Which regimen is the safest for travelers in endemic regions? C) Which regimen is best tolerated? Methodology: The literature research was conducted through the Internet. The Medline and Cinahl databases were used, as well as the search engines google, altavista and lycos. The research included articles that described clinical trials. The material was selected based on the aforementioned research questions and the chronological time limits. Results: Atovaquone/proguanil, tafenoquine, primaquine were the most effective regimens. Tafenoquine, as well as, primaquine have been related to hemolytic events in individuals with G6PD deficiency, gastrointestinal disorders, backache and flue-like syndrome. Doxycycline and mefloquine were related to gastrointestinal and neurological disorders. Those were the less tolerated regimens. Conclusions: Atovaquone/proguanil, tafenoquine, primaquine were the most effective regimens. As far as safety is concerned, tafenoquine and primaquine should not be prescribed to individuals with G6PD deficiency. All the regimens were considered well tolerated, however, in doxycycline and mefloquine trials were the most withdrawals due to adverse effects.

Introduction: The compliance to the rules of hand hygiene is one of the main features of hospital infection programs. It is imperative to apply strategic measures concerning the personnel training in order to correspond more effectively to the given guidelines. Purpose of the Study: Informing the personnel and the EKAB rescuers in order to change their approach over the appliance of precautionary measures. Bibliography: All the information feedback derives mostly from the internet and especially from electronic libraries (CDC, Blackwell Synergy, Mednet). The Hellenic Centre for Infections Diseases Control has been also a valuable source of information. Conclusion: The evaluation of precautionary measures as well as the application of the syndromic surveillance system is based on data capture by the syndromic surveillance of Emergency Departments. According to which, it is necessary to: • Classify diseases • Initiate alert • Follow the directions • Feedback. The successful application of the aforementioned measures will result to the restriction of an infectious disease.

Evidence Based Nursing. A new perspective for Greek Nursing | 208-220

Despite the fact that nursing research has been developed in Greece, nevertheless the provision of nursing care is not based on current research findings, but rather on the knowledge gained by nurses during their undergraduate education. The transition of medicine in the last decade towards evidence based practice had definitely an impact on the nursing profession. The aim of this article is to briefly present evidence based nursing as a process and perspective to Greek nurses. Method: A literature search was performed in order to identify and review relevant articles concerning evidence based nursing. Conclusions: It has been supported that in the practice of evidence based nursing, a nurse has to decide whether the evidence is relevant for the individual patient. The incorporation of clinical expertise should balance the risks and benefits of a possible treatment and take into consideration the patient’s unique clinical circumstances and preferences. The stages to identify evidence for nursing practice follow firstly a question which must be addressed for a particular clinical problem. Then, a literature search is performed in order to access the evidence and critically appraise it and finally the best available evidence that fits into a particular case is utilized. Evidence based nursing bears benefits for patients, nurses and health care services, as well. In the process of implementing evidence based nursing in Greece there are several constraints. Taking these difficulties into consideration and until Greek nurses familiarize themselves with evidence based nursing care, it is necessary to constitute workgroups of nurse researchers aiming at forming clinical guidelines for nursing practice, which will based on the best available evidence.

The article presents the circumstances in 19th century Athens regarding psychiatry and curative thermal springs for treatment of the mentally ill and patients suffering from arthritis and skin diseases. At the time it was believed that mental illnesses therapy could be achieved through praying in holly ground by staying in monasteries and praying along with monks at mess. For the treatment of arthritis and skin diseases patients were advised to visit curative thermal springs in Edipsos and Methana. These facts were taken from literature and newspapers (Press) of that era.

Aim: Aim of this study is to estimate the conditions of hygiene and safety under which the personnel of restaurant and catering businesses works and also their effect in the health. Material and method: Τhe sample of the study consisted of 120 workers in restaurant and catering businesses in the Santorini island. The data was collected with anonymous questionnaire and it included individual demographic elements and elements about workers health and safety. Results: From the workers that answered the 62.5% were men and the 37.5% were women. The 28.8% were food handlers, 40.8% waiters, 6.8% employees of cleanness, 0.8% cashiers and 22.9% directors. The 61.7% were seasonally occupied persons. The experience of the workers in similar work places was until one year 20.3%, 1-5 years 31.4%, 6-10 years 17.8% and above 10 years 30.5%. The 56.7% of the participants didn’t know about the dangers against their health and safety that comes from their work and the 30.3% declare that they had accident during their work time. The 43.5% of workers are informed about the dangers for the health and the safety at their work mainly by their employers. Heavy objects or charges transport: often the 30%, sometimes the 50.8% and never the 19.2%. Contact with chemical materials as e.g. detergents, disinfectant, insecticides at the implementation of work often declare the 30.8% and sometimes the 36.7% of the participants. Falls or slips at the work reports 1-3 times 28.6% and 4-5 times 0.8%. In case of fire the 57.8% answered that they have been trained and know what they will do, the 41.4% declared that they will react instinctively and the 0.9% did not know what to do. The work environment causes stress: often for the 24.4% of the participants and sometimes for the 39.5% them. Conclusions: The workers in the restaurant and catering business don’t know about the dangers that they face in their work and this means lack of education programs in occupational safety and health. Also it seems that the workers don’t have access to the informing from specialists in occupation safety and health since they declare that they are informed about the dangers for the health and the safety at their work mainly by their employers.

PURPOSE: The assessment on the attitude and the views of blood donors related cloning. As well as the research on cloning in comparison with several demographical factors likes the educational level, sex age and religious beliefs. MATERIAL AND METHOD: The subjects of study were 252 volunteer blood donors, who gave blood and its byproducts to a Blood Donation Center in Athens. The data was selected through a written questionnaire especially created for the purposes of this study. RESULTS: The ever whelming majority of blood donors, which came to more than 50%, agrees that cloning insults human dignity and disturbs human and generally nature diversity. Concerning the reproductive cloning a high percentage of 66,7% stated that they are strongly opposed to that method while the 42,5% are in favor of Curative cloning. Various factors that influence the general attitude towards cloning are the religious beliefs and the educational level. CONCLUSIONS: The conclusions of the certain survey prove that reproductive cloning is considered to be an immoral method of reproduction and human nature is insulted and human and natures diversity from is disturbed. On the contrary the importance of curative cloning is acceptable for the cure of various diseases as well is great influence on the section of transplantation.