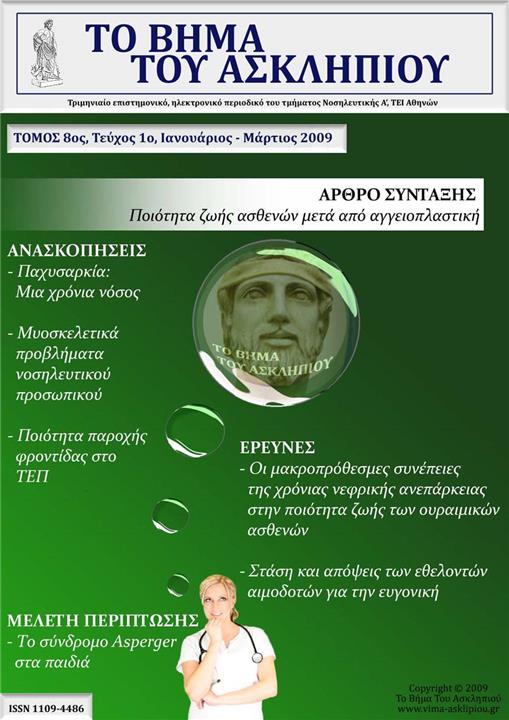 Quality of patients life after angioplasty | 2-4

The last decades, obesity represents one of the most serious health issues with approximately 310 million people presently affected globaly and is frequently cited as a chronic disease. The term obesity refers to the excessive accumulation of fat, mainly under the skin but also on various organs of the body. Obesity’s most common cause is the intake of more calories than those required for one’s daily needs. The aim of the study was to review etiology of obesity, as well as the accountable risk factors. The method οf this study included bibliography research from both the review and the research literature which referred to the etiology, the risk factors of obesity and the beneficial role of physical exercise on weight management. Results: The majority of research studies showed that a growing number of adults, children and adolescents around the world, is facing the danger of becoming obese. In literature is cited that both genetic and environmental factors are accountable for the development of obesity. It is well established that the main therapeutic approaches to loose weight are life-style modifications and the combination of a well-balanced hypocaloric diet with regular physical exercise. Conclusions: The problem of obesity and overweight has become an epidemic in most developed countries. The rapid increase in the numbers of obese people reflects environmental changes, the reduced activity and also the increased food intake.

Aim: This study wants to clarify the issue of quality in health but also to determine the qualitative and quantitative quality indicators in Emergency department that their measurement is a discipline to countries developed in the area of health in order to promote quality in emergency care. Measurement of specific indicators through the evaluation of data and results, quality in Emergency Room is verified. Method: Review of relative bibliography was made in electronic bases of Blackwell-Synergy (1990-2008), and Medline (1990-2008) using as key words Emergency Room, safety, quality, responsiveness, satisfaction, effectiveness, efficiency, appropriateness, accessibility, competence. Complementary bibliography was found through other electronic search engines and by reviewing references of already found articles. Results: determinants for quality in the provision of health services were found to be the credibility that consists of the stability of care, the consistency and the duration of performance, the personnel responsiveness and the vigilance to serve the health user, its efficiency, the accessibility of health services, the politeness, understanding and communication of health professionals in relation to their professionalism, the security and the working environment

The survival and the quality of life depends on the recurred improvement of the biological parameters followed by the according technical support as it happens with patients of chronic renal failure. AIM: The aim of the present study was the evaluation of personality disorders disturbance and the consequences on quality of life. MATERIAL-METHODS: The facts were selected through a questionnaire (EPQ) which is estimated as reliable for the estimation of groups of patients belonging to the Greek population. In the present study 103 patients were included, 54 (55%) men between the age 51,5±15,4 and 49 (45%) women between the age 50,3±15,5, who belong to (CRH) one of the three medical units of artificial kidney in corresponding hospitals of Athens. The patients fulfills the above mentioned questionnaire, EPQ which contains 84 questions from which 24 for the control of psychotism, 22 for neurotism and 19 questions for the extroversion, 16 for the control of lie intention and the rest included diversion tactics. RESULTS: We concluded that all three scales of personality disorders appeared to be systematically affected in comparison with a group 138 healthy persons of the control group, matched according to their age and sex. In details, we recognized that males patients under the CRH program have been concentrated in a lower area of the scale of neurotism while female patients appeared to be concentrated in a lower area of scale of psychotism. The initial complaint, which provoked the initial disorder and the resultant need of incorporation into CRH program, was contributed to specific types of personality disturbance. Moreover, the patients with vascular complaints appeared with the tense to develop neurotism in a higher degree than patients with glomerulonephritis, whose account scale showed higher reduction. The disorder of neurotism appeared significantly reduced in patients with multicystic disease of the kidney. In the opposite side the disorder of psychotism reached a scale degree similar to that of patients with glomerulonephritis. The history of failed renal transplantation or the hope of transplantation in the future modulated the personality disorder appearance. Finally, the marital status of patients had serious impact on the modulation of personality disturbances. Specifically, it has been observed that larger number of single patients deal with problems related to the neurotism than married patients. This can be a proof of the fact that the contribution and support of the family during a CRH program may be a matter of crucial importance. CONCLUSIONS: in conclusion, the patients with chronic renal failure which comes as a result of systematic vascular complaints or uncurable pathological situations of urinary system appear to face personality disturbances. The type and the seriousness of those disorders depend on the sex, the age and the initial pathological base of the patients, which provoked the chronic renal failure and the need of incorporation into a program for chronic recurrent heamodialysis. Moreover, the type and the importance of the disorder is attributed to the history of the patient or the hope of cadaveric or live transplantation of kidney

PURPOSE: The assessment of the attitude and views of blood donors in relation to eugenics. As well as the relation of eugenics to several demographical factors such as educational level, sex age and religious beliefs. MATERIAL AND METHOD: The subjects of study were 252 blood donors, who voluntarily gave blood and its byproducts in a Blood Donation Center in Athens. The data was collected through an anonymous questionnaire especially designed for the purpose of this study. RESULTS: The overwhelming majority of volunteer blood-donors agree in percentage greater than 50%, that society will probably never offer sufficient support to individuals with disabilities and that a woman should be submitted to prenatal control to determine if she medically advised in relation to her age and family background. 79% agrees that they would want to learn more about the moral questions that arise from the application of genetics to human. Independent variables that influence the attitude towards eugenics were found to be the importance of religion, the level of education, the sex and the number of children. Also, there was a connection of religion and the number of children with the knowledge of moral questions on genetics. CONCLUSIONS: Prenatal control should be carried out only when serious genetic illnesses or illnesses whose treatment is imperative to start early are expected. The attitude of citizens towards individuals with disabilities should change radically so that the biases and social stereotypes are raised. A better provision of information of the public on the moral questions that derive from the application of genetics to humans is also suggested.

The Asperger’s Syndrome is reported in the pervasive developmental disorders and was categorized as a separate disorder, initially in the ICD -10 (World Health Organization, 1992) and afterwards in the DSM-IV (American Psychiatric Organization, 1994). The Asperger’s Syndrome is distinguished by a team of symptoms that concern the low output in the social interaction and the communication dexterities, as well as the increased stereotypical behavior in various activities and interests. The aim of this particular article that constitutes a case study is the descriptive approach of the Asperger’s Syndrome, through the study of the child behavior. The methodology that was followed in the present case-study was based on inquiring studies and reviews that were drawn from international data bases that correspond to this particular case study of syndrome Asperger in children. Results: The individuals with Asperger’ s syndrome, as well as the case study, tend to experience really big difficulties in elementary social behaviors, as failure in the development and creation of friendly relations or in the search of entertainment activities with others. Moreover, they face difficulties in the comprehension of non verbal communication (body language) and the other’s expressions, the body gestures or even the eye contact. Conclusions: The precocious recognition of Asperger’s syndrome is imperative, with final objective the continuous briefing and sensitization of all health professionals, as well as the wider public, toward this syndrome. The earlier a parent foreruns for the diagnosis, the bigger probabilities they stand for a potential functional re-establishment of the syndrome