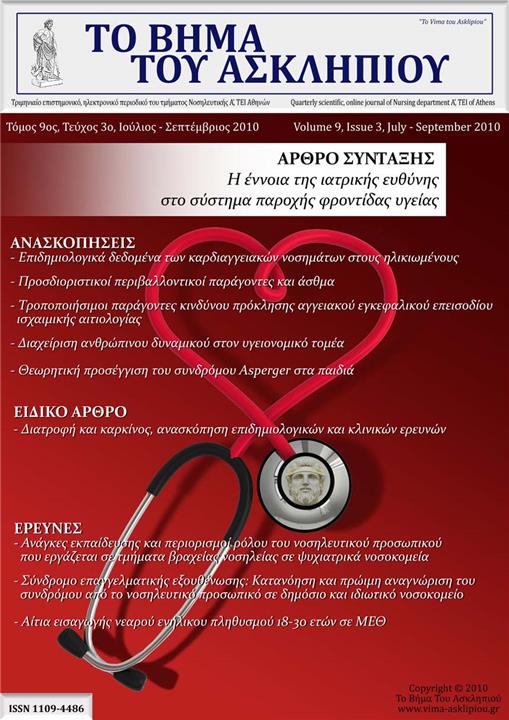 Epidemiological data of cardiovascular diseases in the elderly | 230-242

The environmental impact on the development of asthma | 243-265

During recent years, it is noted a great increase in asthma cases worldwide due to environmental contamination, according to the scientific community. Asthma is a chronic disease of the respiratory system with a key point the shortness of breath due to a temporary airway stenosis. Its main characteristics are: an increasingly assuming epidemic dimensions disease, its chronicity and unidentified pathogenesis. Furthermore, it is a multifactor disease and it is always first on the subjects list of every scientific meeting. People of all ages and origins suffer from this chronic disease which can set great limits to their daily life or even be sometimes fatal, if it is not kept under control. Purpose: Show the environmental impact on the appearance and development of asthma. Review (Methodology): Bibliography review is recently Greek and international and information was retrieved from Pub med and TRIP databases. Results - Conclusions: Air pollution and the effect of western lifestyle contribute to the increase of asthma prevalence in developed countries. Data from several studies argue that changing nutritional habits, reducing physical activity and coping with daily stress in today’s fast-paced, changing world affect directly the development of asthma. By assuming new dimensions in world climate changes, increasing sensitization in allergens, using respiratory irritants, such as pesticides and compounds and chemicals of industrial origin, and at the same time the poor indoor air quality and family history of asthma lead to new asthma cases worldwide. Moreover, the minimization of the symptoms and the control of the disease offer the opportunity for the patient to a better quality of life. Finally, by understanding better the environmental factors which trigger the development of asthma and by explaining the involved gene action, they will be delivered more effective prevention and treatment programs.

Management of the human resources in the health sector | 280-307

There are many common points between the theory of the management of human resources and other general fields such as the business theory and the management theory. Especially, the management of nurses includes all the procedures which are involved in order to hire the right people for the job. The necessary procedures are in chronicle sequence the attraction of employees, the choice between the most skilful of them, their control and certification, the proper delegation of duties and the preservation of this personnel or its promotion to the next level. The aim the present study is the analysis of the parameters relative to management strategies in nurse departments. Method: This study was based on a search which was carried out through relative bibliographical references both from international and Greek textbooks and also through the Internet in recognized databases. Conclusions: The foundation stone in the theory of nursing management is the idea that the employees have to meet a double challenge. This challenge is the maximization of their productivity and at the same time the fulfillment of the organization purposes. The efficiency of human resources at the health sector is resultant of many powers. These are the hierarchical promotion, the motives, the employee’s satisfaction, the working conditions and the in-service training which should be provided for life

A theoretical approach of Asperger’s syndrome in children | 308-322

The Asperger’s Syndrome is reported in the pervasive developmental disorders and was categorized as a separate disorder, initially in the ICD‐10 (World Health Organization, 1992) and afterwards in the DSM‐IV (American Psychiatric Organization, 1994). The Asperger’s Syndrome is distinguished by a team of symptoms that concern the low output in the social interaction and the communication dexterities, as well as the increased stereotypical behavior in various activities and interests. Aim: The aim of this present study was the descriptive review of bibliography concerning the epidemiology, the differential diagnosis from the autism, the etiology, the diagnosis, the therapeutic approaches and the adaptation difficulty of the family environment, with regard to the investigation of the Asperger ’s syndrome. Material and method: In the present review, the methodology that was followed included specialized electronic research with regard to the Asperger’s syndrome in children, using special keywords. Results: The review of the bibliography showed that the individuals with Asperger’s syndrome experience really big difficulties in elementary social behaviors, as failure in the growth and creation of friendly relations or in the search of amusing activities with others. Also, they face difficulties in the comprehension of not verbal communication (body language) and the other’s expressions, the attitudes of body and the eye contact. Conclusions: The precocious recognition of Asperger’ s syndrome is imperative, with final objective the continuous briefing and sensitization of all health professionals as well as the wider public toward this, under the prism of interdisciplinary approach.

Nutrition and cancer: Review of epidemiological studies and clinical trials | 323-343

Risk factors of cancer include unhealthy dietary habits, physical inactivity, smoking, various genetic and environmental factors. Cancer is the second cause of death after cardiovascular diseases with increased incidence; moreover, 80% of gastrointestinal, breast and prostate cancers are attributed to unhealthy eating habits. Many surveys have investigated the role of diet in cancer prevention. Here we summarized current knowledge about dietary factors associated with cancer incidence. There is a strong correlation of the protective effect of fruits and vegetables with colon cancer and the negative effect of red meat and the protective effect of milk on colorectal cancer. High alcohol consumption is related to higher incidence of mouth and esophageal cancers, with hot drinks playing a role in mouth or even gastrointestinal cancers. High fat consumption seems to play a negative role in colorectal cancer, where sugar and salt might be negatively related to stomach cancer. Beyond nutrition, physical inactivity and body fat seems to play an important role in cancer, where there are strong evidence that the first protects against colorectal cancer and the second increases the incidence of breast cancer after menopause. Data for the role of micronutrients, vitamins and minerals lead to the suggestion that dietary supplements should be avoided and all nutritional needs should be covered through a well balanced diet.

Aim: The aim of the research was to record the main clinical problems that mental health nurses and assistant nurses encounter in everyday practice. Material-Method: Data collection based on semi-structured interviews and nurses’ quotes who work in psychiatric acute inpatient wards. Content analysis was carried out and data was categorized into main themes. The total sample consisted of 82 mental health nurses and assistant nurses. Results: Analysis of data revealed that: The constraints of nursing role include the lack of autonomy, the accountability, the medication administration and nursing interventions. Training and clinical needs concern the managing of crisis, the collaboration inside the therapeutic team, the lack of nursing staff that means less time spent with the patient, the security in the work place and the psychological support for nurses. Conclusions: The findings indicated that mental health nurses are called to undertake a demanding role in every day clinical practice with inadequate preparation and training.

Burn-out syndrome: Understanding and early recognition of the syndrome from the nursing staff in public and private hospital | 359-374

The analysis and the investigation of the burn-out syndrome have to a great degree preoccupied the researchers in the sector of health internationally. Regarding the nursing science and the Greek reality, it tends to look like an outbreak of an epidemic, it consists a risk for the mental and physical health of nursing personnel and influences the quality of the available health services. Aim: The aim of the present study was the investigation, the understanding and the early recognition of the symptoms of the burn-out syndrome from nurses who work in private and public hospitals of Crete. Material and method: Semi-structured interviews were used in a sample of eight (8) nurses from two hospitals (private and public sector) of Crete. The data were analyzed based on the principles of content analysis. Results: The analysis of data revealed no differences between the nurses in the private and the public hospital with regard to the early recognition of symptoms and the comprehension of the burn-out syndrome. The majority of nurses knew the definition of the syndrome and most of them presented symptoms that included sexual disturbances, insomnia, gastro-intestine disturbances and headaches. The pressure of workload, the low income and the work environment were considered by most nurses as the main factors that contributed in the onset of the syndrome. Conclusions: The majority of nurses can recognize the early symptoms of the burn-out syndrome and many of them experience the syndrome. Support and respect on nursing staff from the supervisors and efforts to reduce the workload, the development of educational programs and a satisfactory work environment constitute the essential factors for the prevention and the treatment of the syndrome.

Admission of young adult in Intensive Care Unit (ICU) consists a complex phenomenon with various dimensions. The aim of the present study was to explore the causes of admission in Intensive Care Unit of young adult 18-30 years old according to their demographic variables. Method and material: The sample of the present study consisted of individuals’ age 18-30 years old that were hospitalized in Intensive Care Unit during 2005-07. Data was collected by the use of a specially designed clinical protocol which besides the demographic data included variables related to the causes of admission, the duration of treatment as well as the outcome of the disease. For the analysis of data the statistical packet SPSS v.13 was used and the method x2. Results: 74,9% of the sample studied was men and the 25,1% women. Regarding nationality, 78,4% were Greek whereas 21,6% were foreigners. The fist reason of admission in ICU was road accidents with percentage 59,4%, pathological problems followed with 14,1%, the post-operative period with 9,8%, work accidents with 5%, criminal actions with 4,2%, suicide attempt with 4% and the use of drugs with 3,5%. The statistical analysis of data showed that : regarding the relation of admission to marital status and occupation, students, private employees and free-lancers who were not married were more likely to be involved in road accident, p<0,001. The foreigners were admitted more frequently because of work accidents and criminal actions with statistical significant difference compared to Greeks, p<0,001, respectively. On the contrary, Greeks admitted less frequently because of suicide and pathological problems with statistical significant difference compared to foreigners, p<0,001, respectively. Conclusions: Social and demographic variables significantly affect admission of young in Intensive Care Unit.