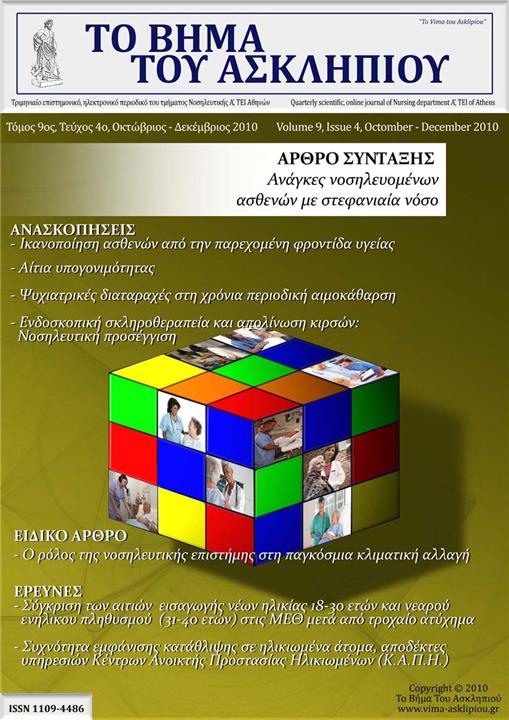 Satisfaction of patients from provided quality of care | 398-408

Infertility seems to be a multidimensional health issue with personal, economic and social dimensions. According to the World Health Organization (WHO), approximately 8-10% of couples are facing some kind of infertility problem. Infertility is defined as the inability of getting pregnant after trying for at least 6 months or one year, for women over 35 years old, without use of birth control means and while having normal sexual intercourse. Aim: The aim of the present study was to review the literature about the causes οf infertility, as well as the risk factors. The method οf this study included bibliography research from both the review and the research literature, mainly of the last five years in the “pubmed data base” which referred to the causes οf infertility, as well as the risk factors. Results: During recent years, it has been noticed a remarkable increase in the prevalence of infertility, globally. According to the literature, nowadays, infertility occurs not only due to health problems but it may also be a result of the choices imposed by the modern lifestyle. Results of recent studies indicate that, regarding women’s aspect, problems of fallopian tubes, ovary, matrix or disorders menstruation, are the main causes of infertility, while in regard to men’s aspect, the poor quality of sperm and varicocele. Other contributing factors were environmental, socio-economic as well as advanced age of child-bearing and smoking. Conclusions: As it is supported by published evidence, infertility is an issue of great complexity, which threatens with demographic problem. Information of couples regarding risk factors consist the cornerstone for prevention

The progress in Medical and Nursing Science has contributed significantly to the lengthening of life expectancy regarding several categories of ill people with chronic diseases. However, when the quality of life depends on the periodic correction of biological parameters, as with people with chronic renal failure, this situation affects both the patient and the environment. The aim of the present study is the evaluation of psychiatric disorders which are presented in haemodialysis patients as well as the influence of these disorders on their quality of life. Material and method: Review of relative bibliography was made in electronic basis of Medline (1980‐2009) using as key words haemodialysis, chronic renal failure, quality of life, psychiatric disorders. Complementary bibliography was found through other electronic search engines. Results: The chronic character and the frequency of renal failure, the possible dysfunction in the movement as well as the necessary long treatment cause problems, which extend the disease beyond the medical area offering socioeconomic dimensions, which complicate the associated psychiatric disorders. Conclusions: These patients suffer from the disease as well as from the treatment and at the same time they are faced with the number of the accompanying and interrelated problems, which come up in their everyday living and prescribe restrictively their way of life.

The increased morbidity rate, as well as the considerable mortality rate that oesophageal varices induce, render variceal bleeding prevention and therapy crucial to the overall treatment of portal hypertension. For this reason, there are two endoscopic techniques broadly used: the endoscopic sclerotherapy (EST) and the endoscopic variceal ligation (EVL). Aim: A review on the nurse’s role and significance in the endoscopic techniques of sclerotherapy (EST) and variceal ligation (EVL) based on recent bibliography. Material - Method: An overview of resent Greek and international literature mainly of nursing interest published during the last 25 years, on Medline. Results: EST remains the corner stone of acute variceal bleeding treatment. On the other hand, EVL has become the endoscopic treatment of choice for the prevention of recurrence of this serious portal hypertension complication. However, their implementation in variceal bleeding primary prevention is confined only to cases that medication is either inadvisable or ineffective. EVL displays more technical difficulties when compared with EST and requires further experience, although complications of the former are altogether fewer and less significant than those of the latter. Conclusions: The nurse who is integrally trained and familiarized plays a significant role both in the evaluation of the patient’s clinical course before, during and after the endoscopic process, and the appreciation of whether the endoscopic implementation has achieved its aims or not.

The role of nursing science in global climate ghange | 460-472

Global climate change has had and will have considerable effects on human health. Nursing must become more centrally involved in mitigation, reducing the acidity and response efforts of the problem. Aim: The review of contemporary literature available data regarding the role it can play in nursing science to global climate change. Material and Method: The method used to search electronic databases (MEDLINE, CINAHL, SCOPUS) for review of foreign language literature in 2009. The search took place in December 2009. As eligible for the literature review, the studies found that developing a framework for modern professional nursing action to address and reduce the acidity of global climate change. Results: The main modes of action can be taken by nursing to reduce the acidity of the problem is a) common tactics, which may be followed by all nurses, leading by example, giving advice and taking political action, b) to determine the specificity and the contribution of nursing in specific areas of general health systems, c) right priority of sites, namely the geographical environment is critical and determines the nature of the professional response and d) public surveys and studies on which nurses need to base their decisions because the nursing needs a dedicated area for research to support environmentally activity. Conclusions: The nursing should be linked closely with other professions and sectors in order to maximize national and international efforts to mitigate and combat climate change. The profession's response to climate change should be as varied as the sector itself, and from all countries.

Depression in the elderly is considered an important public health issue. Depression is the most common mental health problem among older people. It poses a critical impact on well-being and the quality of life of elderly and it is related with high expenses and great demand of health care services. Objective: To estimate the prevalence of depression among elderly in an urban area’s population and to investigate the aggravating and protective factors. Material and Method: The sample consisted of 360 individuals, 218 women and 142 men, aged 60 years or older, members of the four Open Care Centres for Older People (KAPI) of Agioi Anargyroi Municipality, in Attica. A questionnaire for demographics and phycho-social factors was used, whereas depression was probed through Geriatric Depression Scale, (Short Form - GDS-15), which has been standardized and adapted in a Greek elderly population. Results: 30,28% of the sample had depressive symptoms (22,22% moderate and 8,06% serious-clinical type depression). It was also shown that depression at women (70,6%) appeared in a percentage over than the double against men (29,4%). The symptomatology of depression occurred widely among widower/widows, elderly being divorced or separated, people living alone, those with multiple pathologies and elderly informal family carers. Symptomatology of depression appeared in a lower rate among elderly who took care of their grandchildren or participated in social activities. Conclusions: The ascertainment high percentage of depressive symptoms in our sample of elderly population confirms the emergency of creating a strong psycho-social supporting network aimed to prevent depression among elderly and health promotion in the elderly in the context of Primary Health Care (PHC).