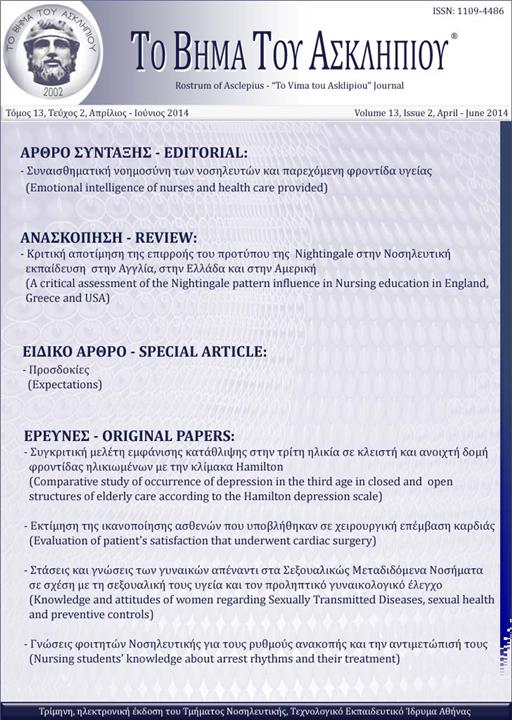 A critical assessment of the Nightingale pattern influence in Nursing education in England, Greece and USA | 123-133

Nightingale’s personality, her values, the vision, organizational skills and successes laid the foundations of nursing as a profession. The philosophy maintained for Nursing, the organizational framework and the education system chosen were key elements that characterized the Nursing Education for almost a century. Purpose: The purpose of the present paper was to critically review the literature related to the impact of Nightingale in nursing education and its relation with the University curriculum in England, Greece and USA. Material and Methods: This literature review utilized the pubmed database and the google scholar searching machine, using the keywords: “Nightingale”, “education”, “England”, “Greece”, “USA”. The research was conducted between 1970 and 2008. Results: According the Nightingale’s perception, the goal of nursing education was the Christian moral and spiritual development of the nurse character and the development of technical proficiency. Three factors led to the success of the venture: the recruitment of female students, the philosophy of the education and the education system. The education system that Nightingale’s nursing school adopted, set the standard for most schools around the world, and included some theoretical courses and mostly clinical practice. The training philosophy that dominated was the apprenticeship. Conclusions: Nightingale’s paradigm in nursing training in Europe, applied for over a hundred years. Although the system evolved, many aspects of the old system of education still coexist. More research is required in the Greek and international nursing educational context.

Expectation is a complex dynamic concept that can be applied in the field of health. Many researchers have developed various theories about expectations. Self-efficacy and modification of behavior consist key-elements for the fulfillment of an expectation. Apart from personal expectations, significant role play social expectations as they arouse by the interaction of individuals. Regarding health sector, the concept of expectation describes what users of health care services expect to encounter and what they would like to meet by them.

Depression is a serious mental disorder that is a leading cause of morbidity in the elderly and affects the daily lives of the elderly leading to the marginalization and stigmatization. Purpose: The purpose of this study was to investigate the prevalence of depression in the elderly, both in the community and in closed structures and identify possible differences between these two groups. Material and Method: The studied population consisted of 200 elderly people. One hundred of them came from closed structure care (nursing home) and the remaining 100 by Open Care Centres (KAPI). For data collection, a specially designed questionnaire that included demographic data, information about their health and their daily habits and Depression Scale Hamilton, were used. Results: The majority of the sample (50.5%) was men. Depressive symptomatology was showed by 44% (31% mild and 13% moderate). The men of the nursing home had greater depression than men of KAPI and showed a greater percentage of women (27.3 % mild and 12.1 % moderate), with women of the nursing home outweighing the percentages of those in KAPI. Depressive symptomatology exhibited by widowers, people with multiple pathology and those who did not exercise, with rates of 61.5%, 34.6% and 73.1% respectively. Big difference appeared between closed and open structure, where the elderly in nursing home seemed to show greater depression by 53%, versus 35% of those in KAPI. Conclusions: Gender, marital status, presence of pathology, exercise and living in closed structures of care, seem to influence the occurrence of depression in the elderly.

Patient’s satisfaction constitutes valid indicator of quality of provided services of health. The aim of the present study was to estimate patient’s satisfaction that underwent cardiac surgery. Material and Method: The studied population consisted of 69 patients who underwent elective cardiac surgery in a hospital of Athens between the period January and May 2011. To assess the patient’s satisfaction a questionnaire conducted by Greek researchers and a form for recording the social - demographic and clinical data of patients was used. The questionnaire included 33 questions on a five-point Likert scale (1-5), which occurred in four dimensions: (a) physician and nursing care (b) organization of care, (c) hospital environment and (d) other quality factors. For all questions the declared higher value corresponds to a higher degree of satisfaction. For the comparison of proportions chi-square and Fisher’s exact tests were used. In order to compare mean values between the two study groups Student’s t-test was used. For the comparison of patient’s satisfaction dimensions between the control and intervention group the non-parametric Mann Whitney test was computed. All p values reported are two-tailed. Statistical significance was set at 0.05 and analyses were conducted using SPSS statistical software (version 19.0). Results: 58% were males (n = 40) and the average age was 66,5 (± 8,9) years. The overall satisfaction of patients from the hospital was more moderate (3,33 ± 0,89). The satisfaction of the four dimensions of health services was assessed as follows: a) physician and nursing care 3,57 (± 1,05), b) Organisation of care 3,27 (± 0,846), c) hospital environment 3.09 (± 0,819) and d) Other quality factors 3,41 (± 1,01). The correlation between satisfaction and demographic characteristics of the sample showed no statistically significant results. Patients aged 61-74 years felt more satisfied (p> 0,187). Married and secondary school graduates felt more satisfied with the overall hospitalization [(3,85 ± 0,021) and (3,66 ± 0,024), respectively]. The correlation between satisfaction and clinical characteristics of the sample showed no statistically significant results. Conclusions: The overall satisfaction of patients undergoing heart surgery was good, but not high. Ii suggested the need to improve physician and nursing care as well as other factors affecting patient satisfaction.

Both Greek and international literature suggest there is an increase in STDs worldwide, something that has motivated health agencies to design health promotion strategies. Aim: The aim of the present study was to assess knowledge and attitudes of women regarding STDs, as well as to correlate the findings with their sexual activity and gynecologic symptoms. Materials and Methods: Our reference population comprised of women residing in the city of Corinth. A specialized, valid and anonymous questionnaire was used, that included items concerning gynecologic diseases, STDs, prevention measures and birth control methods. Data collection took place from March to May 2013 and the SPSS 17.0 was used for the statistical analysis. Results: The majority of our sample (n=214) consisted of women aged 20 or younger (40.2%), without children (65.1%). 56.7% of the participants initiated sexual relationships at age 18 or older, while 55.2% said they always used condoms. Regarding STD history, 76.40% reported no such history. 67% thought that condoms were the safest birth control method, 64.4% said that casual relationships were the main cause for STD infections, 47.1% said that Pap tests should be done after menstruation, and 65.1% that mammograms should be a routine examination after the age of 30. Also, 65.4% of the participants said they consulted their gynecologist for anything regarding prevention examinations or gynecologic conditions. Conclusions: Despite some limitations, the present study concludes that many, mainly younger, women lack important information on such subjects and adopt high-risk behaviors. Consequently, the implementation of targeted, nation-wide sexual health programs and pre-symptomatic testing is deemed necessary.

Nursing students’ knowledge about arrest rhythms and their treatment | 202-220

Cardiovascular diseases are one of the leading causes of death worldwide. Knowledge of health professionals for the arrest rhythms, is considered particularly important for the early recognition and proper treatment. Aim: The purpose of the present study was to assess the knowledge of nursing students on arrest rhythms and how to treat them. Material and Methods: The sample studied included 151 students from the Department of Nursing A' (n = 60, 40%) and B' (n = 91, 60%), TEI of Athens, of whom 83% (n=125) were women and 17% (n=26) were men with a mean age of 23 years. Data collection was performed with specially designed questionnaire, that apart from demographics and students’ education level, it included ten questions about arrest rhythms’ knowledge and also self-assessment questions of their level of knowledge. The data were analyzed with the SPSS package v.19, using the criteria t-Test and χ2. Results: Of all the participants in the research, 95% (n = 144) did not answer correctly more than 6 questions from a total of 10. The students of the Department of Nursing A’ recognized with greater accuracy the arrest rhythms (p = 0.003). Those studying in lower semester acknowledged best the arrest rhythms (p = 0.002). Students who had recently attended course in basic or advanced resuscitation recognized best the arrest rhythms (p = 0.006). Older students knew better right treatment of the arrest rhythms (p = 0.037). Also, students who had attended the course of cardiac nursing in the last year, knew better the right treatment (p <0.001). Finally, the level of self-assessment was in line with the actual level of knowledge of students (p = 0.05). Conclusions: Continuous attendance of courses, education on certified programs and refresh courses help to maintain a good level of knowledge for longer periods.