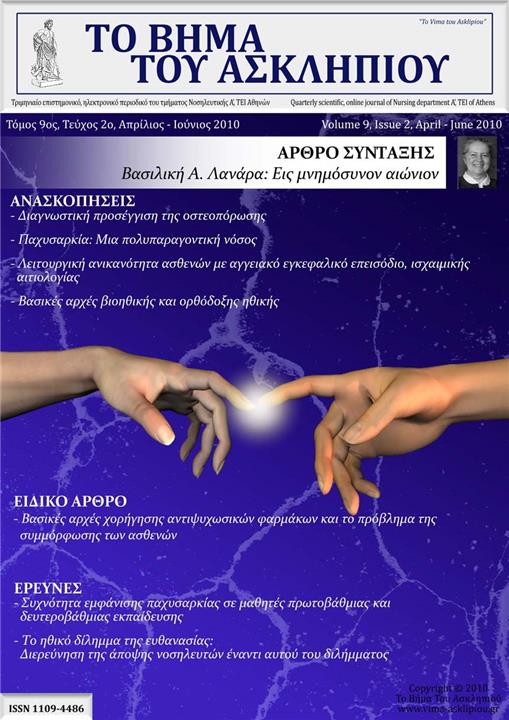 Osteoporosis is a metabolic disease that causes serious health problems, resulting in morbidity and mortality especially in the elderly, but even at younger age. It concerns all the developed countries including Greece and raises causes socio-economic consequences. The aim of present study was to review the existing literature regarding the contemporaneous methods in diagnosis of osteoporosis. The method οf this study included bibliography research from both the review and the research literature which referred to the relation between diagnosis and osteoporosis. Results: The majority of research studies showed that the most important risk factor for osteoporosis is the increased loss of bone mass, as age is progressing, which in women, usually starts during menopause. This, fact in conjunction with the longer life expectancy of women, explains the growing prevalence of osteoporosis in women compared to men. Other relevant studies have shown that this metabolic disease is related to high risk for bone fractures. The prevention of osteoporosis requires optimization of leading bone density during childhood and adolescence, early detection of increased bone loss in postmenopausal critical period and education of patients being at high risk. Conclusions: The number of candidate osteoporotic patients is high, as well as the final number of individuals who will suffer from the consequences of the disease. The assessment and prevention of osteoporosis requires overall approach of the disease and highlights the need of training the population, factors that, significantly contribute to the control of the disease.

Stroke is the third leading cause of death and the first cause of disability, in the developed countries and it is frequently described by the literature as a major global health problem. It is estimated that stroke is responsible for approximately 4.5 million deaths per year and over 9 million stroke survivors, globally. Aim: The aim of the present study was to review the literature about the consequences of functional disability that stroke imposes on the survivors’ life and to shortly describe functional instruments used in evaluation of stroke patients. The method οf this study included bibliography research from both the review and the research literature, mainly in the pub med data base which referred to the functional disability of stroke patients, as well as to the scales used for the evaluation of functional state. Results: Despite the accurate diagnosis and the recent therapeutic advances, stroke can still cause long-term disability in the majority of patients which induces significant changes between the patient and his environment. The results of recent studies indicate that the loss of independence that experience stroke survivals has significant consequences on their quality of life and it is likely to lead to family-crisis and social isolation. It is also widely accepted that the economic impact of stroke is considerable, worldwide. Recovery of functional disability after stroke is influenced by many variables, of which the main are the initial severity of stroke, the level of deficit and the level of social and family support. Ιn clinical practise many measurement instruments are applied and capable of providing assessments of functional ability and other related concepts since it is well documented that evaluation of functional state is a matter of great importance for the assessment of patients’ outcome. Conclusions: As it is supported by published evidence, rehabilitation of neurological deficit in conjunction with appropriate therapeutic interventions focused on the psychological, familial and social problems that face patients after the discharge of the hospital can significantly improve their quality of life.

The galloping progress in genetic and medical technology has led to the birth of the new science of bioethics. Bioethics examines the ethical dimension of problems arising from the application of the discoveries in the fields of biology and genetics and the effects they may have on nature and people in particular, from the aspect of anthropological teaching of the church Fathers. Aim: The aim of this article is: a) the delimitation of the scientific field of bioethics and its historical background, b) the emergence of the principles of the science of bioethics, c) the determination of the principles of orthodox morality though which the issues arising from the application of genetic engineering in human are faced. Material and Method: The method used to collect material for the writing of this article “principles of bioethics and orthodox morality”, was the widespread review of international and Greek bibliography. For the collection of the English bibliography the electronic database CINAHL was used. The keywords used in combination were Bioethics orthodox ethics. Results: The basic principle of bioethics are: a) the principle of autonomy, b) the principle of equivalence, c) the principle of not causing harm and pain, d) the principle of utility or beneficence, e) the principle of justice. The orthodox approach to the issues arising from the application of genetics human is based on the Orthodox anthropology, as expressed in the Bible and the texts of the Fathers of the Church. The centerpieces of the Biblical and Patristic anthropology are: a) that man was created as the exact replica of the Triune God and b) that man is a single psychosomatic entity.

The introduction of antipsychotic medications in the clinical practice of psychiatric pharmacotherapy that took place half a century ago was a real revolution. Antipsychotic medications reorientated the organic basis of mental disease and gave a clear therapeutic choice in the treatment of psychotic patients. The gradual application of their use made possible the de-institutionalization of patients as well as the 4th revolution of psychiatry, that is community and social psychiatry. Αntipsychotic medications did not prove to be the solution to every problem that patients faced. This occurred despite the fact that novel drugs were discovered being very effective and deprived of the majority of unwanted side effects of the older drugs. In any case the discovery of antipsychotic medications deserves the title that has been granted to them, and which is that of the second revolution of psychiatry. The knowledge of the basic principles of their pharmacologic actions, their unwanted side-effects and the measures of their prevention and treatment constitute a necessary tool for every nurse; especially when taking into consideration the fact that antipsychotic medications are used in a wide variety of cases even reaching up to the treatment of acute organic brain syndromes, that are highly prevalent in the medical and surgical units of general hospitals. This article deals with the basic principles of nursing process when administering antipsychotic medications. Furthermore, it also deals with the major problem of the compliance of patients to their treatment.

Prevalence of obesity in primary and secondary education students | 187-204

The dilemma of euthanasia: Evaluation of nurses’ attitudes against this dilemma | 205-221

The progress of science didn’t only have as a result to cure most illnesses, but also to find methods to maintain life in human beings. But who decides about life or death? How much has this dilemma been a great concern of the Greek nursing profession? Purpose: The aim of this research is to investigate the attitudes of Greek nurses towards the decisions of euthanasia and specifically towards energetic and passive euthanasia and assisted suicide. Material – Method: The data for the research were collected from 212 nurses from four General Hospitals in Athens. For the evaluation of nurses’ attitudes towards euthanasia we used a questionnaire especially designed for this purpose by the researchers after reviewing the bibliography. The statistical analysis of the results was done with spss13.0 and the factor chi-square. Results: The results indicated that, 50.9% of the participants in the study considered that human beings have the right to death, while they were against the right to suicide by 79.7%. Euthanasia was the main concern in the nursing profession to a percentage of 70.3%. As a general perception, 65.1% of the nursing staff did not accept euthanasia in a theoretical level. It came out that the nursing staff was against euthanasia in a practical level by rejecting every form of it. Specifically they were against energetic euthanasia by a percentage of 84.4%, the passive euthanasia by 57.5% and the assisted suicide by 84%. Conclusion: All the above findings of the research lead to the result that the dilemma of euthanasia is the most frequent and cruel dilemma among the Greek nurses. The creation of bioethics committees in every hospital and a clear legal framework is perhaps the solution to this major problem.