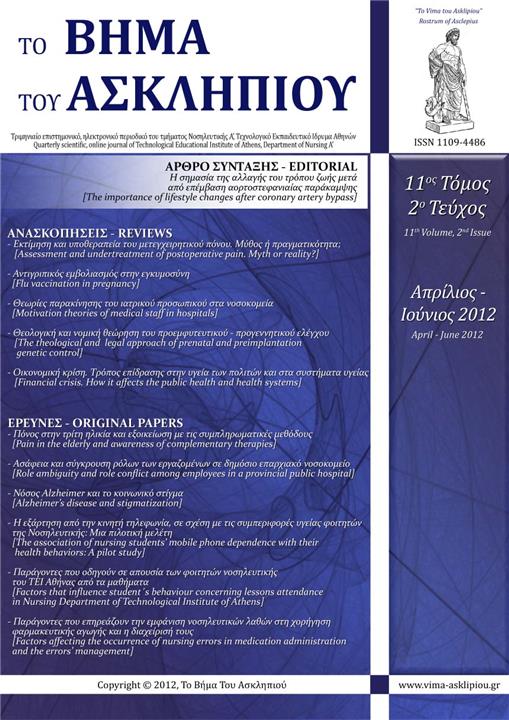 The importance of lifestyle changes after coronary artery bypass | 151-153

Assessment and undertreatment of postoperative pain. Myth or reality? | 154-170

In recent decades, interest in hospital administration has turned increasingly to the effective motivation of doctors. Purpose: The presentation of selected theories of motivation through literature review and their application in medical and hospital staff. Material and methods: The Greek and international bibliography has been reviewed, and in particular papers on the motivation theories of medical staff published during the last ten years via Pub Med and Science Direct, during the period 2008-2011. The keywords that were used are: motivation, doctor needs motivation and motivation theories, motivation and medical stuff. Results: According to the literature, the motivation of doctors is a complex issue. The financial incentives cannot by themselves stimulate physicians, incentives that have to do with the achieving of goals and the recognition in the workplace and the possibility of professional development are more realistic and feasible. The issue of incentives is important for individual achievements and for the management of medical staff. The application of modern theories of motivation is essential to maintaining a satisfied staff, which sets the basis for creating a robust health care delivery system. Conclusions: For an efficient use of medical resources is necessary to diagnose the needs and selection of appropriate techniques, which offer various theories of incentives which will motivate doctors increasing their performance and satisfaction from work.

Financial crisis. How it affects the public health and health systems | 202-212

Aim: The economic situation affects health indicators like life expectancy, morbidity, mortality and access to health services. Methodology: Α research in bibliography was done in Pubmed, Scopus, Sciverse with key words: health, health systems, economic crisis, unemployment, poverty. Results: Unemployment is also associated with increased daily alcohol consumption, suicides increase, domestic violence, and it reduces road deaths at 1.4%. In particular, poverty leads to disease as people are forced to live in degraded environment, fed poorly and work in dangerous and unhealthy environments. Conclusions: In particular, the economic crisis is leading to job insecurity, unemployment and poverty that eventually lead to the exclusion of more people something that is responsible for various mental disorders. Health systems on the other hand in crisis are facing financial problems because of reduced government spending on health due to economic scarcity and because of disruption of foreign economic aid from richer countries, which cover a large part of health funding.

Pain in the elderly and awareness of complementary therapies: a questionnaire based survey | 213-234

Pain in the Elderly amounts to one of the most prominent parameters that affect deterioration in their quality of life. About 60-71% of community based elderly report presence of pain, and 33% of them report daily persistent pain. Published research results indicate that complementary therapies reinforce the analgesic effect of medication either directly by their analgesic action, or indirectly by reduction of tension and stress, endorphin production, increase of blood flow and mobility. The survey object was to investigate the degree of awareness among the elderly, of complementary therapies, particularly of those who experience pain and are 65 or over. Sample and methodology: The survey population consisted of 100 people - members of KAPI in Athens and Thessaloniki. Data collection was based on an interviewing schedule and questionnaire completion by two different groups of 50 people each. As far as methodology was concerned the sample was selected according to availability and willingness to participate. Results indicate the following: 66% of the total sample report that they would use some complementary therapy for pain relief. Another 72% of the total sample (i.e. 2/3), report that they require more information on complementary therapies. Conclusion: Elderly people are interested in complementary therapies as alternative methods of pain management. Furthermore, should they have access to more information on this subject they would use them more frequently.

Aim: The main objective of the study was to explore social bias experienced by patients with Alzheimer's disease and to investigate the knowledge of a sample of the general population regarding this particular disease. Method: The sample consisted of 91 individuals who were first degree relatives of members of three Centers of Open Protection for the Elderly, who did not suffer from dementia as they have recently undergone screening for Alzheimer's disease. A survey design was adopted using a face-to-face questionnaire which apart from the demographical data and two open-ended questions, was based on a 5-point lickert scale, looking at knowledge, attitudes and stigma towards the disease. Data was analyzed through SPSS software using descriptive statistics while results were regarded significant at p<0,05 level of significance Results: For the quantitave questions, cronbach's a was a=0,75 and the average discrete index 0,31. Stigma was explored through a series of direct and in-direct questions and while 70 (77%) persons distinguish dementia from mental illness, 9(9,9%) people did not answer these questions. The majority (62,6%) did not stigmatize the patient as 57 persons said that the patient is not to blame for the disease. Conclusions: from the distribution of results it becomes evident that there is a need for education, training and multifaceted enlightenment of the general population on issues concerning mental health. Answers that implied tendencies of marginalization of patients with dementia emanated mainly came from individuals in the sample with limited knowledge of the illness and relatively low educational background.

The association of nursing students mobile phone dependence with their health behaviors: a pilot study | 264-280

Mobile phone use is such a common phenomenon nowadays, that many researchers refer to children and adolescents as a 'mobile generation'. Several studies associate mobile phone use (in terms of voice communication, text sending and internet use with psychological, social and physiological outcomes. Aim: The aim of this study was the exploration of the association of mobile phone dependence with health behaviors in a population οf students of nursing. Material-Method: This study, which follows a cross-sectional survey design, was conducted from November 2009 to January 2010. The convenience sample of the study included 206 nursing students of a Higher Technological Education Institution (response rate 68.5%). Data was collected with the use of anonymous questionnaires. Mobile phone dependence was measured with the Mobile Phone Dependence Questionnaire-MPDQ (by Toda et al. 2006). Statistical analysis was conducted with the Statistical Package for Social Sciences (SPSS 15.0). All hypotheses were tested at a significance level of p <0,05. Results: The mean score for mobile phone dependence was 25,4(± 12,1 95% Cl:23,7-27), while the percentage of students who presented a high level of dependence (mean value of dependence> 38) was 13,6%. Women presented a higher degree of dependence compared to men (p=0,007), while there was no significant difference between smoking and non-smoking students (p=0,435), as well between alcohol and no alcohol consuming students (p=0,368). Students who had no physical exercise had significantly greater dependence on mobile phone use compared to students who were exercising for one or two hours per week (p=0,001). Testing the relationship between age and dependence, a low negative correlation was found (rho=-0,254, p=0,001), demonstrating that younger students are more prone to mobile phone dependence. Conclusions: Mobile phone use in the daily routine of the students is so prevalent that it could be characterized as a "modern" addiction. The fact that this dependence was found to be associated with some unhealthy health behaviors, should raise concern both in individual level,(students and their families), and in administrative level (the faculty of educational institutions) about the future health status of the student population.

The short-term absence of Nursing students from their studies is a phenomenon that has troubled teachers a lot. The lack of participation in courses is a widespread threat to education. Absences are often related to poor academic performance, unprofessional attitude and inadequate socialization. Purpose: The investigation of the reasons why students of Nursing Department of Technological Institute of Athens do not attend classes. Material-Method: The studied population consisted of 579 students of Nursing Institute of Athens. 65.6% (N = 380) were in the Nursing department A and 34.4% (N = 199) in department B. For data collection, which lasted 12 months, it was used a special designed questionnaire. For each year was distributed separate univariate and multivariate logistic regression analysis. Data analysis was performed with the statistical package SPSS ver. 16. Results: The occupational status has an important role in attendance. It affects more those who do not attend classes, p <0.001. Students in first year of their studies were 1.154 times more likely to attend classes more weeks in a year compared to the others (B: -0.143, P: 0.001, OR: 0.867, 95%OR: 0.798-0.942) and 3.86 times more likely to criticize an inadequate professor in relation to the other (B: -1.350, P: 0.003, OR: 0.259, 95%OR: 0.106-0.635). The fourth year students were 2.29 times more likely to respond than others that the time courses were not helpful (Β: 0.832, P: 0.024, OR: 2.298, 95%OR: 1.117-4.728). Conclusions: The occupational status is the main reason for nursing students not to attend lectures. The main reasons of absence, concerning non-working students, from the lectures are the non-transmissibility of the teacher and the fact that he is not accessible.

Nursing, as a humanitarian science, offers its services, on the comprehensive care of patients. Each nurse handling, involves the possibility of error. Meurier appointed nursing error as "any act, any decision or omission by a nurse, assessed as incorrect, by more experienced colleagues, and have adverse consequences for patients". Medication errors are the most common category of nursing errors. They affect health, patient safety and also have a high economic impact to health systems of each country. Aim: The present study investigated the causative factors of nursing errors, the frequency of medication errors and the ways of reporting, recording and managing these errors in the hospitals of Greece. Method: For the purpose of this study, a descriptive cross-sectional design was used. The sample consisted of 176 registered nurses, from eight public and three private hospitals, working in the ICU and their duties included the administration of drugs. Data collection was performed using an anonymous structured questionnaire that included demographic characteristics of the sample and closed questions about the factors implicated in the occurrence of errors and their management. To investigate the existence of correlation between demographics and various questions referred to the management of errors by nurses, the criterion of heterogeneity X2 of Pearson was used and to check for correlation between questions that reflect the participants' views on working conditions and management of errors, the non-parametric correlation coefficient of Spearman (Spearman rho) was applied. The statistical analysis was performed using SPSS 17 software. Results: After statistical analysis of data, the most important causative factors for the occurrence of errors are the nursing workload (78.9%), the distraction of nurses (75.8%) and the burnout (56.8%). More than 9 out of 10 nurses have made errors in drug administration (91.5%), especially with the wrong dose (34.7%) and the wrong time of administration (32.4%). Finally, 86.6% of the respondents believed that the official record of nursing errors would improve health care provision. Conclusions: Nursing errors are a reality for Greek hospitals. The major causative factors are workload, burnout and frequent interruptions to nurses during preparation and administration of medication. Although nurses seem to want the official record of errors, much still refuses to reveal any, while in Greece there is no formal mechanism to manage these errors.