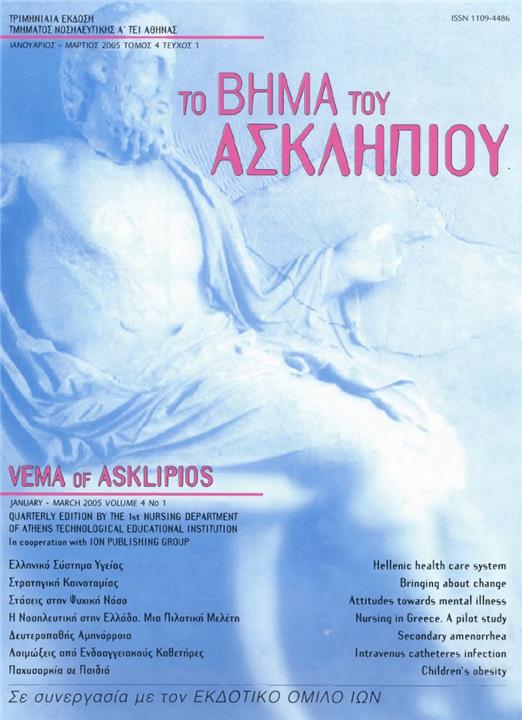 Fundamental reform in the health sector in Greece was the voting of 1397/83 law, which forecasted the foundation of National Health System. A fact that contributed in the growth of a welfare state. The Health System is the total sanitary units of a country that are in continuous collaboration and functional interdependence for the maintenance and health promotion. From 1983 and so on, efforts of growth and modernisation of health system have been realized that contributed in the configuration of its, up to date, structure. Motive force of reformation and establishment of health system constitutes its financing from various sources of public or private sector.

A hospital is considered to be an institution and a technical system at the same time. The technology influences vitally the hospital that uses a line from new technologies and innovations. The nurse is called daily to adopt new techniques, new terminologies, new problems and to approach them with new prospect. Traditionally, the concept of innovation determined only what it had relation with the technology. Today innovation is defined as any idea, practice or ideology independently if it is really new, but that becomes perceptible as new, from the unit (individual or clinic) that it is adopted. The innovations that we select as solution in a problem are radical or evolutionary and concerning entire the hospital or a department of it. The diffusion of innovation depends from the type of the people that adopt it. The factors that contribute the innovation can be sought in the widest and in the internal frame of the hospital. The strategy of innovation is focused in the love of innovator for change, in the remuneration of individuals that promotes innovations, in the collective work, in the existence of cultural model, in a flexible nursing service, in the reject of classic flow charts, in the via life education and in the adaptation in the wishes of patient. It is point out the continuous need of vigilance of nursing administration in the modem reality. The increase of faculty for innovation will help in the professional survival and development of anyone who is occupied with the administration of nurses.

Nursing in Creece from Antiquity until the Second World War: A Pilot Study | 16-24

A pilot historical study of nursing in Greece from the antiquity until the Second World War is presented m this article. The beginnings of nursing in Greece are going back to the «anarrotiria» and «Asklipiea» of ancient Greece. In the Byzantium there were functioning institutions that provided care to the population and nursing staff was working to those institutions. Minimal are the testimonies for nursing in the Ottoman Empire. After the independence of the country from the Turks, the first efforts for establishing a sanitary system was made, the first hospitals founded and nursing was practiced by practical nurses. In 1875 the «Nosokomikon Paideftirion» was established, where women nurses were trained for providing care to patients. In 1894, in Thessalonica, the Theageneio hospital was interested in educating nurses. In March 1897, the institution of remunerated nurse in armed forces. The Greek Red Cross founded in 1914 a school of assistant nurses with two years duration of studies, and to the graduates was given a license for practicing the nursing profession. In 1923 the National Association of Nurses as well as the Red Cross School of Nurses was established. In 1937 the public School of Visitors Nurses was created. During the Second World War 3.000 nurses served in armed forces and 14 were killed.

Patients with homozygous β-thalassaemia develop complications in many vital organs. The increase in life expectancy of these patients has provided the opportunity to come across many of these problems, which were non-existent prior to 1980. The most frequently encountered complication is that of the hypogonadotropic hypogonadism, and more specifically, that of secondary amenorrhea. In this study, we will present older as well as more contemporary views of the pathophysiology of secondary amenorrhea, knowledge of that contributes to more timely and complete treatment of secondary amenorrhea, which results to increased duration of menstrual periods in women with homozygous β-thalassaemia during the fertile age.

This article is focused in guidelines that have been developed for practitioners who insert catheters and for performers responsible for surveillance and control of infections in health-care settings. Major areas of emphasis include: educating and training health-care providers who insert and maintain catheters; and catheters care procedures, and using maximal sterile barrier precautions during central venous catheter insertion.

Aim: to investigate the Body Mass Index (BMI) in children of school age in order to assess the children's obesity in Crete, which is estimated at 39%. Materials and Methods: 168 children between the ages of 6-12 years from the 52nd Elementary School of Heraklion. The children's BMI was established by taking the children's weight and height. The data were analyzed using the Access software.
Results: 37 children (22%) were overweight, 89 (53%) were normal weight and 5 (2.97%) were underweight. Conclusions: In addition to aesthetic considerations, obesity in childhood is a serious risk factor for the health of children, in contrast to obesity in adulthood.