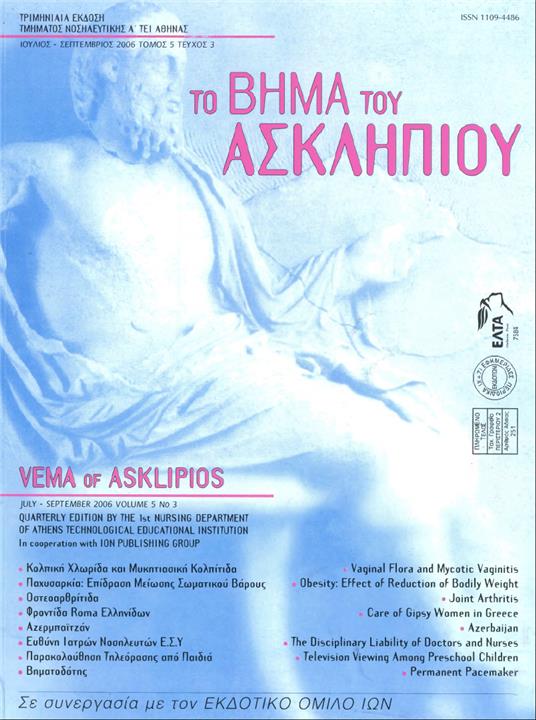 Obesity and Metabolic Syndrome: Effect of Reduction of Bodily Weight | 313-317

The metabolic syndrome is associated with a typical atherogenic dyslipoproteinemia. This dyslipo- proteinemia is characterized by hypertriglyceridemia, increased VLDL and decreased HDL cholesterol concentrations as well as elevated concentrations of small dense LDL particle subfractions. A large number of investigations has proven that physical activity is effective in the treatment and prevention of the metabolic syndrome and the associated dyslipoproteinemia. Increased physical activity has been shown to be associated with higher HDL cholesterol and lower triglycerides as well as a reduction of small dense LDL cholesterol.

Basal Joint Arthritis of the first Metacarpous, Diagnosis and Treatment | 318-320

Basal joint arthritis is a common entity usually affecting middle age women. Patients may complain of pain, decrease of pinch and grip strength and loss on hand dexterity that may hinder normal daily activities. Surgical options do exist of conservative treatment fails. The scope of this review study is to focus through personal circumstances on
the diagnosis and operative treatment of the basal arthritis of the thumb.

Obstetrical and Prenatal Care of Gipsy women in Greece | 321-325

There is limited research concerning the health of Greek Gipsies and part of it refers to the prenatal care and obstetrical problems of Gipcy women. Starting from a young age (adolescence) they give birth to a lot of children. Most of them do are not receive adequate prenatal care during their pregnancy and they often give birth alone in the settlements. Gipsy women have very little knowledge about family planning, prevention of breast cancer as well as cancer of the reproductive system and thus preventative examinations and medical check ups are not pursued.

Azerbaijan: The Humanitarian Action, the Tuberculosis and the Nursing Intervention | 236-330

Nursing is not just a science, but is also tightly connected to the humanitarian concept. In this article the participation in a humanitarian mission to Azerbaijan is presented. The subject is brought out both from a scientific point of view and its human dimension as well. The aim of this mission was the treatment of tuberculosis (TB) in the mountainous region of Caucasus. Some of the means to achieve this humanitarian intervention have been the application of DOTS protocol for the treatment of TB, health education to the population for the prevention of TB, the renovation of some buildings in the hospital etc.

The Disciplinary Liability of Doctors and Nurses | 331-338

This article refers to the liability of doctors and nurses who are occupied by the National Health System. Breaches of discipline and disciplinary penalties are critically examined according to the existing Hellenic laws. The article's final conclusion is that Penal and Disciplinary Law must be strictly enforced by the judges, in order to eliminate phenomena of corruption in the contemporary society and especially in the field of public administration.

Characteristics of Television-Viewing among Preschool Children in Greece | 339-348

Psychological research has found that television (TV) has numerous effects on the behavior of children of different ages. The purpose of this study is to investigate the viewing patterns that have been established by preschool children in Greece and how the characteristics of their TV watching are related to demographic data. The data for the research was obtained from parents through a questionnaire of 23 closed-ended questions. The 355 questionnaires were collected from different parts of Northern Greece and Thessalia. According to the results 71,8% of children are affected by TV watching, especially boys, in the statistical difference p<0,01. Parents provided mediation was related to residence location (p<0,05), socioeconomic status (p<0,01) and mother's educational level (p<0,01). Preschoolers in Greece watch programs (up to 2 hours a day) that are especially intended for children, but parents in the rural areas, with a lower socioeconomic status and education, tend to let their children view them alone and they spend less time discussing TV material and doing follow up activities that elaborate on what has been learned from the program

Information for Patients with Permanent Pacemaker | 349-354

Pacemakers are battery-powered electronic devices which implanted or not to the patient, function to replace successfully the heart rhythm when the heart is unable to contract temporaly or permanently. The use of this device contributed significantly to the therapy of cardiac rhythm.
AIM : The purpose of the present study was to register the incidence of the symptoms related to the disease, the postoperative complications, as well as the activities that should be avoided and to evaluate the degree that the patient is informed after the implantation of permanent cardiac pacemaker for its good function.
MATERIAL AND METHOD: The sample study included 68 patients who had undergone implantation of permanent cardiac pacemaker to the departments of the hospital «Evagelismos» and «Tzanio». The data were collected by the completion of anonymous questionnaire during personal interview with the researcher.
RESULTS: From the 68 patients studied, percentage of 55,9% were men and 44,1% were women. Regarding to the occupa-tional status, the larger part of the studied population were pensioners, to percentage 63,2% and regarding to the educational status, percentage 42,6% were of primary school. After the implantation of permanent cardiac pacemaker, percentage of 27,9% had no symptoms, with diziness to be the symptom with the higher incidence among the manifestated-symptoms to percentage 16,2%. Regarding to the complicat-ions, 61,8% manifestated no complication but among the manifestated-complications the removal of the lead from the correct position was that of higher incidence, to percentage 33,3%.
CONCLUSION: Complete information and education of the patients after the implantation of permanent cardiac pacemaker as well as proper nursing interventions consist a nursing demand, so as to be insured the compliance of the patient