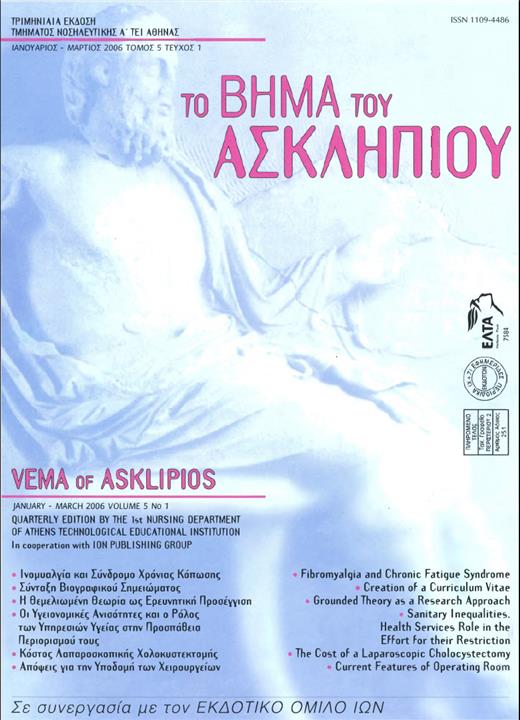 In the area of extraarticular rheumatism, the fibromyalgia’s syndrome is the more painful syndrome of the myoskeletal system. This syndrome is called primary when it doesn’t accompany another chronic disease, or secondary when another disease exists. Patients with fibromyalgia usually have a strange personality, and they suffer from bowel disturbances, sleep disturbances, vasomotory disturbances primarily at hands, similar to those of Raynaud‘s phenomenon. These patients present chronic fatigue and some times depression. The causes and the physiopathological mechanism of fibromyalgia syndrome are unknown, however different physiological alterations have been observed to patients with fibromyalgia. There is not a single therapeutical approach for these patients. Various therapeutical approaches have been tested.

The Curriculum Vitae (CV) is an essential tool that allows the job candidates to give the prospective employer a complete picture of their professional profile.
Some of the possible applications of the Curriculum Vitae include claiming a job, claiming a scholarship or a prize, claiming participation in a committee or a board. It is easily understood that the creation of a successful Curriculum Vitae requires organization, programming and possession of the relevant knowledge.
There is no single correct way to create a CV and the literature offers a wide variety of templates for CVs. However, these templates should only serve as a guide and they should not be copied, as this would result in the loss of the personal style that should characterize each CV.
This article describes accurately and succinctly the different CV types according to their extent and their structure and offers guidelines regarding the information that need to be included in the CV as well as the information that should be excluded from the CV. Additionally, there is also a mention to the correct way of structuring the cover letter that accompanies the CV.

Grounded theory consists a distinctive research approach which aims to discover theories grounded in social processes. It is based on symbolic interactionism and has been utilized in many disciplines such as psychology, education, philosophy and musing. This paper discusses the main features of the grounded theory methodology by analyzing the overall sampling design, data collection methods, the use of constant comparative analysis and issues relating to the review of literature in conducting grounded theory research. Additionally the notion of 'self in qualitative interviews is debated. The use of the approach is proposed of having immense value in revealing unknown theories grounded in Greek nursing practice and education.

Sanitary inequalities. Health Services Role in the Effort for their Restriction | 235-241

The equality in the health care sector, according to the World Health Organisation, is determined by three basic characteristics: equal access in the available care for same needs, equal use for equal needs and equal quality in health care for all. The difference in the health level of various population teams is the result of many factors reaction. They are distinguished in those that are inevitable and in those that can be limited and they lead to inequalities.
It has been proved that the sanitary inequalities are connected with variables that constitute indicators of social conditions as: social class, sex, unemployment, geographic region, religion, cultural values, social politics and the organisation of state providence. Inequalities in health are compound and complex. Consequently, lifting this inequalities presupposes a plan of social interventions from the state, in all the sectors that were mentioned before.
In the epicentre of all statements for the restriction of inequalities, especially in that of World Health Organisation, are found the guarantee of equivalent access and use of health services and a healthy behaviour adoption by the citizens. Hospitals, allocating a high level equipment but also specialised personnel, can play important role in this effort.
The action to the direction of inequalities restriction in the health sector, is today essential more than ever. In order to achieve it however, mobilisation of government mechanism is not enough but is also essential the expression of social solidarity and mutualism from citizens themselves.

The Cost of a Laparoscopic Cholocystectomy | 242-248

The aim of this study was primarily to identify the differences of opinion between thoseworking in the administration of operating rooms (ORs) and operating room (OR) surgical nursing staff,regarding factors responsible for problems arising from the current infrastructure and functioning of Greek ORs.
Methods: This study derives from a questionnaire survey of the opinions of 201 nursing staff working in 49 ORs in
Greek hospitals. Respondents were either OR nurse administrators or OR surgical nurses, thereby
comprising 2 distinct groups of OR nursing staff. Statistical evaluation was conducted using SPSS (c2-
Test, Pearson-Fisher's Exact Test).
Results: The opinions between nurse administrators and surgical nurses about current features of OR
infrastructure is significant difference (P<0.05). It is also clear that both respondent groups hold similarly
negative opinions.
Conclusions: It is clear that OR personnel work in an often hostile environment and that both administrative nursing staff and surgical nursing staff believe that ORs confront problems in effective organisation, time management, communication, and discipline with regard to OR rules and protocols.theme is attempted.