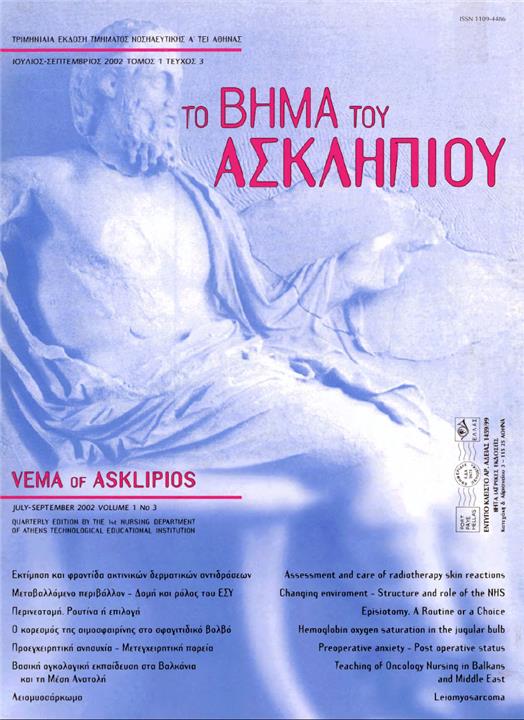 The use of radiation for radiotherapy purposes with cancer patients, and above all radiation using beams, causes some form of skin reaction in all patients. These reactions occur either immediately, -subsequent to or during radiotherapy- thus constituting the acute form thereof, or later on, in which case they are described as chronic. Since the majority of cancer patients will be submitted to radiotherapy at some point in the course of their treatment, it is indisputable that a timely diagnosis, together with the assessment and implementation of preventive and therapeutic measeurs in order to deal with complications resulting from radiotherapy, are of vital importance, while at the same time the effect od these measures on patients' quality of life must be considered. The present review discusses actinic skin reactions resulting from exterior radiation, the effort to assess them as well as the chief possibilities for treatment in terms of medical care and nursing.

The effects of mans constant changing environment in the bipolar healthiilness and therefore its expansion in the structure and role of the NHS. | 121-125

The combat of sickness and the protection of health have always been central to mans activity. Certainly many centuries and stages were required so as to reach the present “mediocen- tral” society as well as a number o scientific fields to approach and examine the substance of the binomial health-illness, concluding to the description of particular prototypes and justification factors. These approaches have affected the health system regarding its structure and function, creating the need for the shaping of medicare, the increase in the cost of services offered, the increase in the quality of life with an emphasis on prevention and the creation of health education programs. At present due to the polymorphism of health-illness and the problems it creates, specialist discuss of a crisis concerning health matters. A specific definition of the meaning of health is necessary for the increase in knowldedge concerning man and his future and the promotion of health as much as it is for the setting of boundaries regarding the region of activities of various medical functions. This will contribute to the evaluation of the cost-advantage of various therapeutic or prevention programs, which are designed and applied on a health level.

The benefits and risks of routine procedures within medicine over the
last twenty years have become increasing questioned. For some years now episiotomy has been a subject of much debate. In more recent years the scope of interest relating to episiotomy has developed more widely from the obstetrician to women who have experienced an apisiotomy. In some ocuntries virtually all the women having an episiotomy. Recent national estimates for proportions of vaginal births assompanied by episiotomy are 28 percent in England and Wales, 50 percent in United States and 38 perxent in Canada. The procedure is not routinely recommended in the United Kingdom and there is a controversy about how many should be performed. Many studies relating to episiotomy have primarily been concerned with when and how to perform the procedure. A number of different influences have affected the way women view episiotomy. There is evidence from the literature, with the increasing trend towards medicalization, that episiotomy has been viewed as an agent of social control. Recently the
House of Committee Second Report on Maternity Services (1992) concluded that until such time as there will be more detailed and accurate research about such intervention as episiotomy, women need to be given a choice on the basis of existing information rather than having to undergo such interventions as routine. Obstetricians in Greece continue to instruct health staff to apply a policy of "avoid tears-do episitomies" routinely. They may be acting in good faith, but the shows that they are wrong. The World Health Organisation has taken a clear stand against routine episiotomy, in the with the best available evidence. Taking these points into consideration it is evident that there is a need to answer the following questions: (a) Are women made to feel they have a choice as far the use of episitomy is concerded? (b) What effects doew episiotomy have on them? Episiotomy is a commonly performed surgical procedure of childbirth but globally the rates vary considerably. Health professionals have always sough to base their decision on the best possible evidence. Researchers indicate that routine performance of episiotomy during an uncomplicated labour presents greater risks than benefits to the childbearing woman. In the United Kingdom, public concern and studies undertaken have seen the decline of episiotomy use. The decline in the use of episiotomy is however not the case in Greece.

Cerebral ischemia is the result of insufficient oxygen supply in the cellular context of brain, for the metabolic needs. This continuous jugular oximetry (hemoglobin oxygen saturation in the jugular buld SJV02) is a reliable index of the balance between supply and consumption of oxygen by the corebral tissue, specially when this balance is subject to continues alterations. We studied the shifts in oxygen saturation of hemoglobin in the mixed venous blood of jugular bulb with the purpose of early detection and prevention of cerebral ischemia. Material-Method In 17 patients ASA III, IV, who underwent carotid artery surgery, a catheterisation of the ipsilateral internal jugular vein was carried out until the jugular bulb and the oxygen saturation was monitored. Moreover samples of mixed venous and arterial blood were taken to measure the difference in oxygen saturation at several phases (before surgery, during carotid clamping, at the end of operation) or during shifts in arterial pressure. Results Despite the oxygen saturation of arterial blood was maintained stable at 98-99% along all surgical procedure, a desaturation of mixed venous blood from 5 to 30% was observed during clamping of carotid artery as well as a decrease of SJV02 from 15 to 55% during decrease of blood pressure >30%, as a reflexion of the decrease of the cerebral blood flow. After the removal of clamps the SJVOz was observed to increase from 5 to 35%. Conclusions The continuous jugular bulb oximetry is a usefull monitoring of the cerebral blood flow in order to recognize early ischemia during carotid artery surgery and to perform surgical and anesthesiological therapeutic intventions.

The preoperative anxiety of patients and its relation with the post operative status. | 135-142

Teaching of Oncology Nursing in Balkans and Middle East. | 143-148

Leiomyosarcomas usually present with symptoms associated with tumor's site or as painless soft tissue masses. We report the case of a young woman with spiking fever and elevated acute reaction proteins for months, in the context of a paravertebral high gr